I like the Churchill Fountain kit on two personal taste issues - plastic nib (not metal) and it's press to post cap (no exposed threads). However, it's too dang heavy and I don't care for all the blingy trim rings. Here's my attempt at fixing those issues... which means I'm ditching the brass tubes, trim rings and metal finial and receiver, and just using the section, section threads, nib and clip. I epoxied things together. I used a piece of stabilized spalted Apple for the body and cap, and did the finial and receiver in African Blackwood. I finished it with Arrow Finish to try and maintain a wood feel. 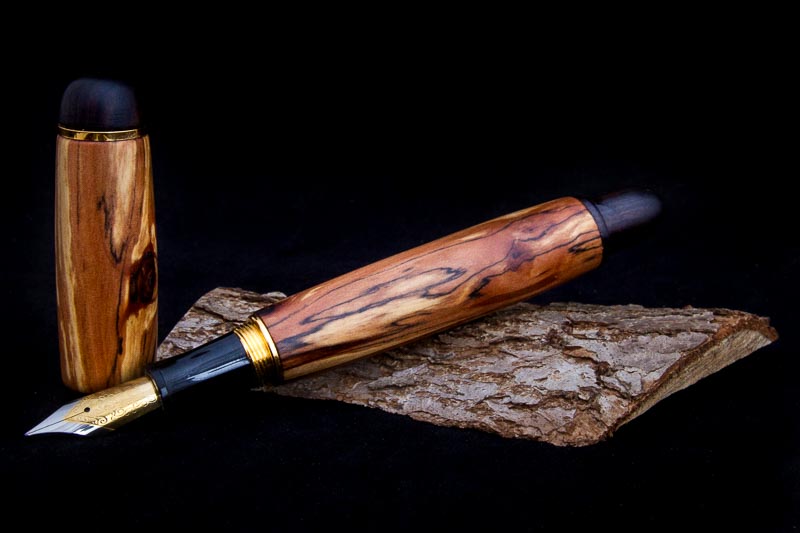 The finial was pretty easy - got one I liked on the second attempt. I roughed it out on the lathe then finished it on the belt sander chucked up in a cordless drill.

The receiver took me three tries to get something that posted nicely in the cap threads. Same technique of finishing it on the belt sander while spinning in a drill. I shortened the receiver up a bit and made the body a little longer compared to the Churchill kit. I think the stock Churchill receiver is a little too long visually.

The cap and body were fairly straight forward, with the usual kitless challenge of holding and supporting the piece. I cut tenons on the cap and body to give the epoxy more than just the surface to hold onto.

I really like working with the Blackwood - it's like turning a crayon. Super nice feel to it also... makes me want to try and do a section with it next time. I'm curious as to how the epoxy (DEVCON) will hold up as a mechanism for affixing the finial. There's a little tension in there with because of the clip and the Blackwood doesn't seem like it would provide as much of a grip as some other woods.

The finished pen weighed in at 0.92 oz., which is almost spot on for what nice, non-kit fountain pens clock in at. Kit pens are at least double that. You can't really write with a kit Churchill when it's posted... the weight and balance is all wrong.

I'm really happy with this - much closer to being able to make the perfect fountain pen.

@budnder
I really like what you have done !! . Thanks for posting ... all the details and the nice pics are very helpful !

Not clear to me about the tenons, though ... at which joins are the tenons ... if you could please explain a little further

magpens said:
@budnder
I really like what you have done !! . Thanks for posting ... all the details and the nice pics are very helpful !

Not clear to me about the tenons, though ... at which joins are the tenons ... if you could please explain a little further
Click to expand...

Tenons are cap to finial and body to receiver... or stated another way, where the Blackwood is glued to the Apple. I drilled a recess into both Blackwood pieces to receive the tenons that project from the Apple. The tenons are both drilled through - the fountain pen converter goes into the receiver a mil or two, and the nib tip is really, really close to the end of the cap, so I wanted to be on the safe side and allow a bit of room there.

In the parts pic you can just barely see the tenon on the body because of the angle.

Thanks for additional details, Roy. . I get the picture a little better now.

Interesting that you have omitted the brass tubes. . I hope that the apple wood is strong enough to support the usage this pen gets.
The stabilization should help in that regard.

That is a unique combination of modifications and materials - I Like IT!

The finished pen looks wonderful, and your photography is equally impressive.

That is a beautiful chunk of wood!! Nice work!

I am trying to understand how the cap is sealed to the pen and then retained on the end when in use. Is it slip fit on both ends? threaded on the barrel but not on the end?

Roy, I like what you've done with this pen. Nice!

jbmauser said:
I am trying to understand how the cap is sealed to the pen and then retained on the end when in use. Is it slip fit on both ends? threaded on the barrel but not on the end?
Click to expand...

These functions are the same as in the kit. I used the small gold plastic insert that has external threads and glued it into the nib end of the body. You can see it in the pics - it protrudes out of the body a few mil. I also used the black plastic insert from the kit and glued it into the cap - it has internal threads that mate with the gold insert in the body. To post, it's a friction fit of the smooth Blackwood on the end of the body into the plastic threads in the cap.
You must log in or register to reply here.
Previous Next
Share:
Facebook Twitter Reddit Pinterest Tumblr WhatsApp Email Link
Top Bottom