My casting contest entry was sort of an homage to the Visconti Divina. In trying to work out how I might do something similar I went down the path below, trying to be smart about some simplifications that would give it a chance to work and not comprise the look too much: 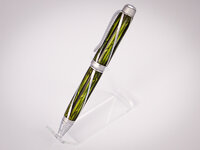 ​
When I first attempted this a couple of years ago, I used alumilite and had some issues with the wire coming loose when I turned it. When I picked this idea back up for this years contest, I decided to try Liquid Diamonds, and I think that worked better. I still had to be super light/careful at the nib end, where the wire gets thin. On a couple of the pens I did, the wire did pop up on that end, but I was able to press/tap it back into place and with a little CA it didn’t really affect the appearance.

While you could certainly make these end caps and center rings to hold the wire on the lathe, I 3D printed them, which made it easy to do a bunch of them. I did four of these pens in total, all with different labels.

I inserted all four wires parallel with the tube and tightened them with an end bend. Then I twisted the end caps in opposite directions to get the wire to revolve around the tube. This also pulled the end caps into the tube for a better seal I suppose. The wire still had a little wobble in it at this point, but I found this was far less noticeable when it got turned down.

I also have a fondness for the old Shaeffer fountain pen striated material, so for fun, one of the labels I designed was an homage to that. That ended up being the look I liked the best and went with in the contest.

I ended up printing the waterproof labels on a color laser, as I couldn't get the same color intensity with my inkjet (too washed out look). I coated the labels with warm, thin Solarez UV resin to make sure they were sealed from the Liquid Diamonds. They sat in the pressure pot for a day, and then hardened further for a day or two after that.

By the way, I don’t know if this is dangerous or not, so attempt at your own risk. That wire is spinning around at a few thou RPM, so if it came completely detached, that might be bad.

Here’s a couple others from the set of these that I did: 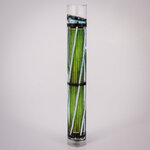 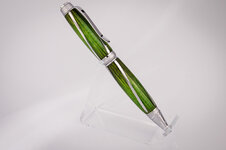 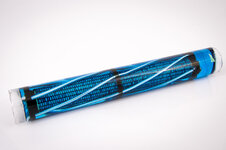 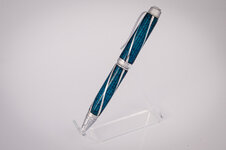 Not only a outstanding design and pen for the contest. Your write up is equally outstanding.

Yours was my favorite in the casting contest because I had not seen something like that before.Great work.

Thanks for doing the write up and giving us the insight of how you did this. I know when I did mine I used that same Visconti pen for inspiration. I did mine a little different and mine did not have the spiral match up quite like yours and I was suppose to attempt it again to do something similar with wrapping both tubes. That was brave to use a cigar kit because of the nib and cap ends being so thin down. I too used Liquid Diamonds because it adheres the best to everything. I happened to use 1/8" aluminum rods and probably would have been better to use smaller rods because you do get to the point when turning of undercutting the rod and that is what makes it jump out. Thanks again and you gave me a few tips when I try my next one. I voted this one as #1 too.

Just superb. I too have always admired the Visconti Divina......
one day...

Simple awesome. And a great write-up for others to play with or at least appreciate what you accomplished and how.

Just for the sake of encouraging another element, this was my failed attempt at something vaguely similar. I was using thin wire. By altering the holes used in the side disks, patterns were possible. I guess this may be a combination of your rods and Dale's (Spanx) thread wrapping. Mine was a failure, but fun - these pictures are from a few years ago (11/2015). I did cast one of these in Alumilite, but never turned it. And yes, I realize that the ends of the wire will be exiting the blank on the ends. But many variations were possible, but I lost interest in this.

Thanks for all the kind words and encouragement.

I usually do CA finishes on things I cast, and didn't expect this would be any different, but it was. I don't usually worry about sanding finer than 400 or 600 before I put the CA on. However, with these, that left a matte finish on the Aluminum, no matter how fine I polished the CA later on. So for these, I had to go through my finishing ritual (400-600-1000-micro-mesh-McGuire 105/205-3M Finesse) to get a mirror going on the bare Aluminum, then I could put the CA on and repeat.

This was my attempt at that design a few years ago and included the blank before casting. My approach as I said was different because I was looking to add to my black and aluminum line of pens I have been working on over the years. I bent the rods to match the flow of the tubes and glued them with CA. Then just cast in LD and spun down and polished. As I also said next time I will lay the both tubes out end for end to get the angle better which is something I did not think off when doing this but easily done. I also will use thinner wire because as I said if you get below center line on the rods you will pull them up and out of the resin. Just another way of imitating a great pen design that I admired for many years. They have another that I have drawn a diagram to give a try at too. This one too is on my list this year. Right now I have 6 pens in various states of build on the table and unfortunately 2 things happened. One my hip is giving me problems and standing is proving to be an issue. I am hoping rest will calm the nerves around hip down. I hope I am not heading down that replacement path. Between hip now, shoulder and back I am really battling some pain. The second thing the other day my Performax drum sander blew an important part and need to get this fixed. But get up everyday and put one foot in front of the other and march on. Speaking of March, can not believe it is MARCH already. Has been a warm winter here in NJ and love it.

You must log in or register to reply here.
Previous Next