When I was much younger

Years ago I got interested in making some solid body electric guitars because the fellow dating my sister-in-law was a musician in a rock band. He also worked at a guitar repair shop plus he was a pretty nice guy. I found it very interesting and decided to fool around and see what I could accomplish with no musical background. This was in the early 80's.

It was a bit of a challenge to see if I could actually make something that worked. I only had a table saw and a router at the time and did most of the work using templated for my router and hand tools. I got pretty good with a spokeshave *G*

It was fun and very educational while it lasted. My friend did all the wiring and setup. He eventually broke up with my sister-in-law but is still a lifelong friend and has his own guitar repair shop in Western New York.

These are all old photos I took with a camera using film that I scanned. 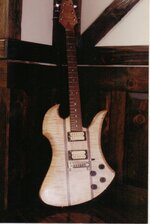 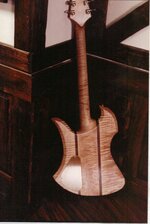 Just one out of birds-eye maple 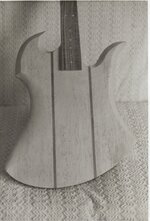 That is a beautiful axe; what is the hardware and electronics!

I was waiting to hear from you Tony when i saw you were a guitar player *G*
Grover gears, Seymour Duncan pickups, Bocote fingerboard , 24 frets , neck through the body is about all I can remember.
Not the best scanned photo .

jjjaworski said:
I was waiting to hear from you Tony when i saw you were a guitar player *G*
Grover gears, Seymour Duncan pickups, Bocote fingerboard , 24 frets , neck through the body is about all I can remember.
Not the best scanned photo .
Click to expand...

Thanks Tony. It was a joy to do the hand work on it. I shaped all the body chamfers with a spokeshave as well as the work on the neck. I was working as a wood patternmaker at the time so it was a bit of an extension of my normal job. I enjoyed the learning process very much.