What would have been my casting entry

I had this Loong Dragon planned for a Bash Casting entry but had an issue with the assembly and rather than rush through it last minute I decided to set it aside and move on to a different project then come back to it. The blank was made form an old oak fence post that had the buried portion completely chewed apart by ants. It looked like a piece a Swiss cheese before I casted it. I had originally cast the blank as a 1.75" x 1.75" x 6" blank for a game call but decided to cut it up into four pen blanks instead and I am glad I did. The resin is Alumilite Clear with Aztec Gold Pearl Ex. 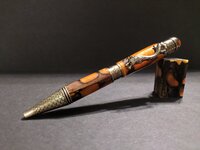 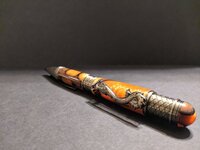