WE HAVE OUR WINNERS

First off I'd like to thank everyone that submitted an entry. All 17 entries were prize worthy pens. We had more entries than I had hoped for.

In third place and winner of A Jr Gent blank from Capt G valued at $75 is Pen#2 submitted by Rick_G. He describes his pen as a "Canadiana pen kit, stirling silver with black titanium accents. Section of moose antler that is almost pure white. Pen is intended as a gift for a friend of my wife who is getting married later this year."
Congratulations to Rick_G. 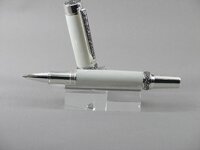 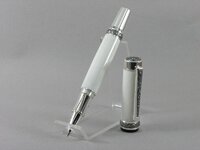 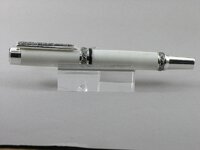 In second place and winner of A silver euro pen kit from Silver Pen Parts valued at $120 is Pen#2 submitted by yaroslaw. He describes his entry as "Pieces of Antler cast in black resin with a touch of pearl pigment. Arrangement of pieces makes interesting visual effect. Churchill FPN in sterling silver with Heritance nib."
Congratulations to yaroslaw. 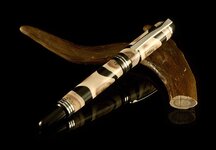 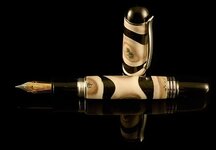 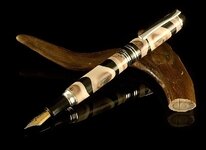 And our First Place winner of A box of blanks from vanngo5d valued at $200 is Pen#1 submitted by Firewhatfire. He describes his entry as "a Full size Emperor Fountain Pen with Horn from a Dall Sheep in Alaska. It does have a different smell from some other antlers I have used but stinks none the less".
Congratulations to Firewhatfire 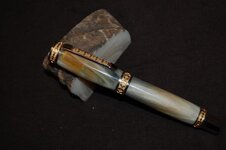 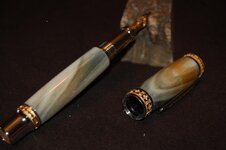 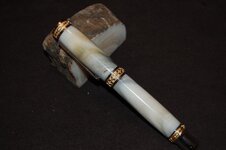 Beautiful pens for sure. Congratulations
V

Great Job and Congrats to the Winners.

thanks for all the votes. I am humbled you all think a pen I made was worthy of your vote.
E

All three are awesome as well as all the other entrants. Thanks for sharing such beauty.

Well done to all
W

Great job to you three and everyone who entered.

I'm glad to see these three win as it was very difficult to choose between those three. All entries were very nice. Congrats guys!

AAGH, I pasted the wrong prize for the First Place Winner. First place receives Box of Blanks from vanngo5d valued at $200

Congratulations to the winners. All the pens entered were fantastic.

Great job one and all. Congrats to the winners, all very well deserved...I knew I was in deep doo-doo when I saw the first pics come out!:biggrin:

They were all deserving! Tough to pick a winner!

Congrats to the first and second place winners and thanks to all who voted for my pen. After engraving this summer it will be given as a wedding pen to a young friend of my wife's.
Going to have to get some of that Dall Sheep horn, really like the colours in that.
S

All these pens were beautiful.
The three on the top could be switched around in anyway and there would be nothing wrong.

Congrats to all - and especially to Yarro, who needed some good news!

I must say that when I looked at the top five, I liked others better than the one I had in the top five.
I showed my wife the top 5 and she even liked some of them over mine.
I was just very happy to be in the top 5. Thanks for all the votes and congratulations to the winners.

Great choices well done everyone who submitted and especially those who won.
R

Great job. Congrats to all!

Amazing work by all
M

Beautiful - more than beautiful
You must log in or register to reply here.
Previous Next

winners of the Advance Casting contest.

L
We Have Our Winners