I stumbled across article this morning. I never knew this existed but it's a great read. I apologize for the format but it would let me share so I had to copy and paste so the word list is in paragraph form.

by Eric Meier
While certain woods can appear basically identical to one another under normal lighting conditions, when exposed to certain wavelengths—such as those found in blacklights, (which are mostly invisible to the naked eye)—the wood will absorb and emit light in a different (visible) wavelength. This phenomenon is known as fluorescence, and certain woods can be distinguished by the presence or absence of their fluorescent qualities.
One of the best examples of fluorescence is found in Black Locust (Robinia pseudoacacia), which is very similar to Mulberry (Morus spp.) in both appearance and weight. But one way to easily distinguish the two is by observing them under a blacklight; Black Locust will emit a strong yellow-green glow, while Mulberry will be non-reactive.
The process of detecting fluorescence in wood samples need not be intimidating or limited to the scientific community—blacklight bulbs are available in many hardware stores for only a few dollars and can be used in standard lamp sockets. (These bulbs should never be confused with germicidal ultraviolet bulbs such as those used in UV sterilizers, which emit UVB or UVC light, which can pose serious problems.
Even though the process of detecting fluorescence is very simple, a few suggestions will help to maximize the effect and make the identification process as reliable as possible:

Freshly sand/expose the wood grain before testing: this can be critical in detecting fluorescence in some woods.

Turn out all other lights for the clearest detection of fluorescence.

Be careful not to mistake simple reflections or illumination of the wood surface for fluorescence: the wood should literally glow.

The most common colors of fluorescence are green and yellow, but some woods can fluoresce orange, pink, red, etc.

Species that are shown to produce a fluorescent response may still vary from piece to piece in the color and intensity of the fluorescence.

Also, another trick to do with a blacklight is what is called water extract fluorescence and ethanol (alcohol) extract fluorescence. Some woods, while they don’t physically fluoresce under a blacklight, will have very bright reactions when wood shavings and/or sawdust is mixed in a small vial or other clear container and held up to a blacklight.
An excellent example of this is Wenge: the wood doesn’t fluoresce, but something as simple as wiping the surface with denatured alcohol will serve to draw out and concentrate the heartwood extractives, and reveal a bright green fluorescence. The proper way to test for this is to take some small shavings (or sawdust) and place them in a small glass vial with either water (for a water-extract test), or denatured alcohol (for an ethanol-extract test).
Alcohol typically results in faster, more vivid, extract fluorescence than using simply water, but water extract tests can be useful when some woods are known to not produce a water-extract fluorescence color, such as Brazilian Rosewood.
[/fusion_builder_column][/fusion_builder_row][/fusion_builder_container]

GET THE HARD COPY

[https://www]If you’re interested in getting all that makes The Wood Database unique distilled into a single, real-world resource, there’s the book that’s based on the website—the Amazon.com best-seller, WOOD! Identifying and Using Hundreds of Woods Worldwide. It contains many of the most popular articles found on this website, as well as hundreds of wood profiles—laid out with the same clarity and convenience of the website—packaged in a shop-friendly hardcover book.

Fluorescence: A Secret Weapon in Wood Identification | The Wood Database

wood database and hobbithouseinc are my two go-to websites for wood identification. lots of interesting stuff for a wood junkie!

Good to know about this !

Dehn0045 said:
wood database and hobbithouseinc are my two go-to websites for wood identification. lots of interesting stuff for a wood junkie!
Click to expand...

One thing I notice about fluorescence is that the CA seems to glow, so ID'ing wood after it's finished can be misleading. It is cool, though. This is purpleheart under a (supposedly) 365nm light. 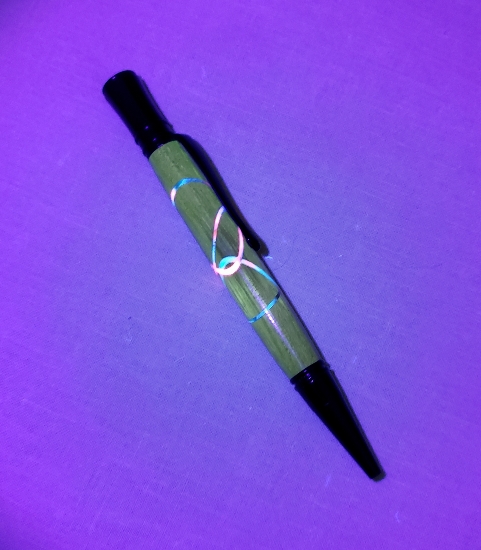 Sent from my SM-N960U using Tapatalk
You must log in or register to reply here.
Previous Next

Shenandoah Arsenal Penturning - How my first pen kits turned out