I'm here for pen stu... well... no. To be perfectly honest, I'm probably here to lurk more than anything else. But I'm here to lurk about pen stuff!

My eventual goal is to be able to make all the bits (minus the guts, because I'm not that crazy) from scratch. Not for any particularly good reason (it's hardly practical) - just because it seemed like a good idea at the time, and I've been too damn stubborn to admit otherwise since. My big hangup, though, is the clip - and the clipless pens I've made have always felt somehow incomplete (not to mention getting lost in my pockets). If you look at the pair of Patrizios below, you can recognize my clone by the shapeless flap of shiny-but-flimsy stainless sticking off the back end where the original has *gasp* a pen clip (and a kinda nice one, at that). 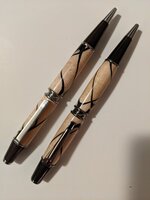 I'm hoping that eventually, if I complain loudly enough, around just the right people, during the appropriate phase of the moon, after doing the nameless ritual dance (which looks only superficially like the Macarena), that great secrets of clipdom may be revealed to me.

I've also made a couple metal & metal/wood hybrids (of rather uneven quality - me being a lousy machinist & all), but haven't been ambitious enough to try again recently. Maybe if I hang around here long enough, I'll be inspired to get off my ass and do something interesting again. 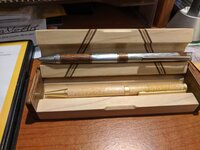 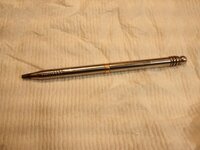 In the meantime, I'm here to leech up as much knowledge as possible, like a big ol' knowledge-sucking lamprey (or a big ol' metaphor-mixing leech?) before the distraction of too many tools inevitably drags me down into another lapse in pennery. Penury? Penalizing? Pen... Pen stuff.


So I guess that's me... but who are you people, and why are you all staring at me like I'm crazy?


-Bats
(In the meantime, I actually kinda like slimlines)
Signed-In Members Don't See This Ad

I just wanted to balance the longest ever introduction to the forum with the shortest response.

You may be thinking of E. Nowhere - it's far more upscale.

W. Nowhere's not a terrible place, though. They say it's a quiet little drinking town with an art problem.


alanemorrison said:
I just wanted to balance the longest ever introduction to the forum with the shortest response.
Click to expand...

I think Seven just beat you.

But I figured that, if I'm going to inevitably wind up lurking, I better make the first post count

Welcome RZ as you wish to be known, from the UK

howsitwork said:
Welcome RZ as you wish to be known, from the UK
Click to expand...

Welcome to the Forum!
Just a note. Most women prefer clipless pens. We carry them in our purse, and the clips hang up on all sorts of stuff.

sbwertz said:
Just a note. Most women prefer clipless pens. We carry them in our purse, and the clips hang up on all sorts of stuff.
Click to expand...

Ooo... really? That's actually good to know - and something I hadn't heard mentioned before (although I was recently told by a local shop that only women shop there, and only men like pens - go figure). That may also give me something to do with those "RZ" stamped kits that howsitwork rather obliquely referenced.

I guess I just didn't spend enough time carrying a purse. And probably didn't think to carry a pen when I did.

Not all kits have removeable clips, though. Slimline/Trimline/Comfort pens all do. Many have the clip incorporated in the cap. But over the years, I've found that given the choice, most women will prefer clipless pens. They don't carry them in a shirt pocket! I also leave off the clip when making a desk set with a pen holder.
You must log in or register to reply here.
Previous Next
Share:
Facebook Twitter Reddit Pinterest Tumblr WhatsApp Email Share Link
Top Bottom