Good morning all. I was going through some pictures to send to my brother in law, and found another small turning that I thought I would share.

A friend of mine, a couple of years ago, used to like smoking a pipe, and always used a small, natural wood pipe that he would purchase from a company that I simply can't remember. He showed it to me and wondered if I could make one, as he knew I used a lathe. I asked him to send me the URL of the store he purchased them from and purchased a couple as I needed to take one apart to see how it was made. They also sold the stems, filters, etc, so I ordered a few of those as well. When I got the pipe, I took it apart. I saw that it was all just press fit, and very tightly. It looked simple enough to make, so I grabbed a nice piece of cherry and started to create one. The first was the bowl. Pretty easy to do. It's just a barrel, and the hole is made with a forstner bit. Then the shank. That was turned down, and a small hole drilled throughout. I then had to drill the hole a second time with a larger bit to accommodate the filter, and finally a third time with a larger bit to accommodate the stem. I then press fit it all together. It took some brute force to get the shank on the bowl, which I did on purpose as it took some force to get the store-bought one apart, so I wanted the same fit. I don't remember what I finished it with, so for that, I apologize. However, I did end up making a second one for myself to make sure it smoked well without burning up. After three or four bowls of tobacco, I was satisfied, and gifted the first one to my friend. I still have mine, but I am more of a cigar smoker than a pipe smoker, but still enjoy the occasional pipe every now and then. 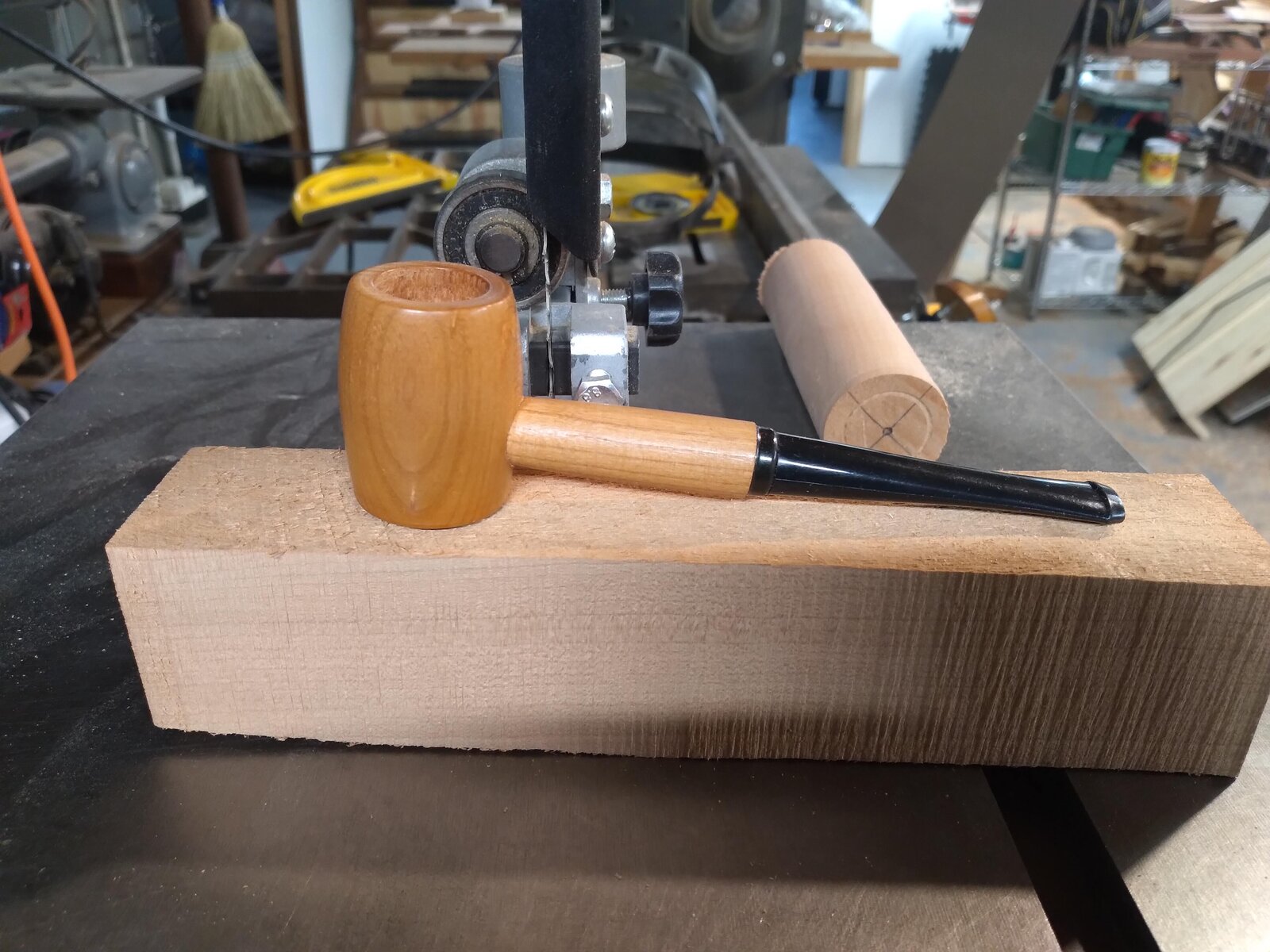 I didn't know you could use cherrywood - it's usually Briar! Neat project! Where'd you buy the parts?

Yeah, I didn't think Cherry would work either. It was an experiment, and it smoked very well, so I decided to use it. A few bowls in, and there was no problem with them.

Nice basic pipe. Becareful pipe making is like penturning it is another rat hole that will take your free time and your money. Been there and spent my time and money doing it. I enjoy every moment of it.

Free hand shaping of the pipe using French wheel sanders and files, then hours of hand sanding, dyeing the briar and finishing. Then a guy showed me a few crazy radically designed pipes, I found a new rathole of design ideas. Most of the makers of the "radical" pipe went underground because of "duplicators". Most no longer post photos or even discuss their projects.

Beautiful pipe... looks a lot like one my dad had when I as a couple of years out of diapers.... I used it one day to blow soap bubbles.....Dad never smoked it afterwards... it was clean, don't know why he wouldn't smoke it anymore.
J