In that thread I made some posts about the newly introduced Blade pen kit now offered by Berea.
This kit makes use of the SKM-88 clicker mechanism made by Schmidt. . The SKM-88 is also used in a previously introduced new pen kit by PSI.

Somebody mentioned that the appearance of the Blade did not appeal because of the overly long metal clicker mechanism at the top.
I suggested a possible remedy for this in the form of a home-made cap to partially cover the metal clicker mechanism.
The photos I presented there, to illustrate my idea, were of an incomplete pen. . I have now completed the pen and show pictures below.

The first picture shows the pen without the cap.

Next are shown two pictures of this pen with the cap installed. . These show the refill extended and the refill retracted.

Finally, I show two (not particularly good) "macro" pictures of the cap alone, hoping to give you some idea of the cap design.
One feature to note is a recess milled to accommodate the metal piece that connects the clip ring (inside bottom of cap) to the long part of the clip. 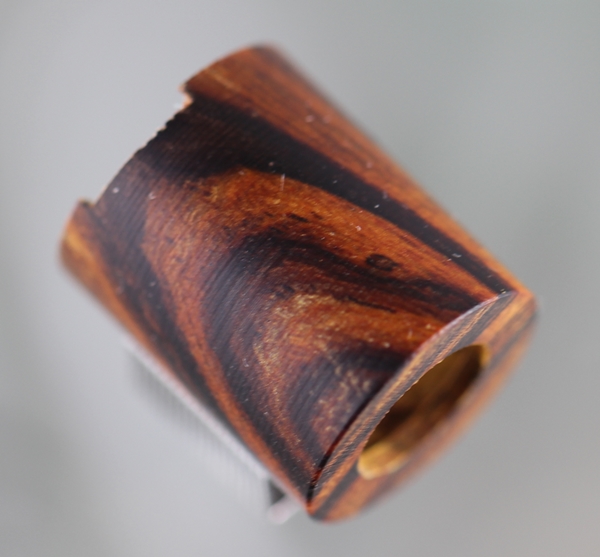 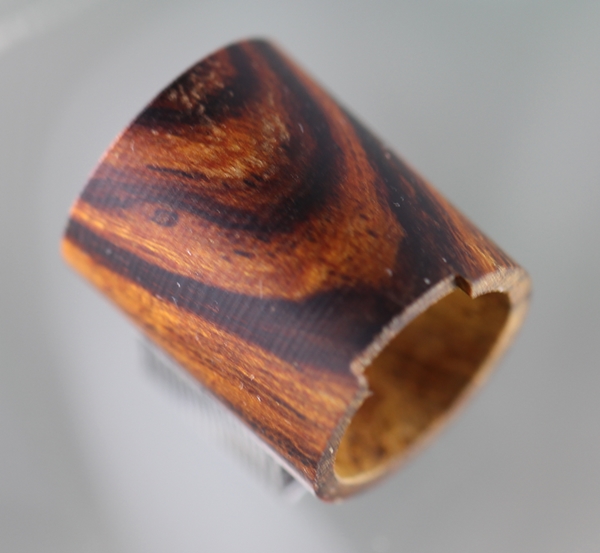 Of course, this cap could be made of any material you wish. . I chose to use a scrap of Desert Ironwood (not finished in any way).

For those interested in the green blank material, it is a vintage cellulose acetate which I purchased from one of our members. . Hope you like it.
The clicker mechanism is a delight to use ... very quiet with a positive, reliable action.

I actually like the looks of it uncapped, with the knurling showing.
But I'm not opposed to the added cap to customize it with a personal touch...much like the center piece in rollerball kit top cap.
K

I like it best without the cap but think the cap to be a very interesting and useful option. Nice work.

Your cap is an elegant addition, Mal. I like the look of some material above the clip - more of the green CA would have looked great too, but the ironwood is beautiful. Nice work!

Wonderful modification Mal. It sure is nice to have options and design choices if you want. Thanks for sharing this!

Thanks for sharing, Mal.
P

It is a piece to do work. Therefore artistic appearance needs to be incorporated, perhaps, but not dominate. P

This goes to show difference in people's likes. Be prepared for all!

I personally LIKE the addition and the color of the cap. I do think possibly a different color such as matching to the body. And maybe a chrome/brass ring separation will alter or even improve the aesthetic perception.

This is a perfect example where a couple of options offer minor changes that can radically change the appearance and "draw".

If I were buying, I would like the wood addition, but I wonder how a chrome ring at the joining point would look.

Another item: that wood ring lends itself to custom shaping also. The possibilities abound!

Very nice work. Thank you for sharing. I like those blanks. Was it relatively opaque?

TonyL said:
Very nice work. Thank you for sharing. I like those blanks. Was it relatively opaque?
Click to expand...

Thank you, Tony, and yes, the blank is totally opaque.

For my tastes, I'd like to see at least a hint of balance with the shape of the nose cone. The hard edges and height above the clip are the two things that just seem a bit off to me. Not much you can do about the height above the clip with this cap idea, but perhaps some shaping of the cap to be something other than a straight cylinder. Maybe even let it go bigger than that the body circumference... like the old Apex kit below.. that might be interesting. 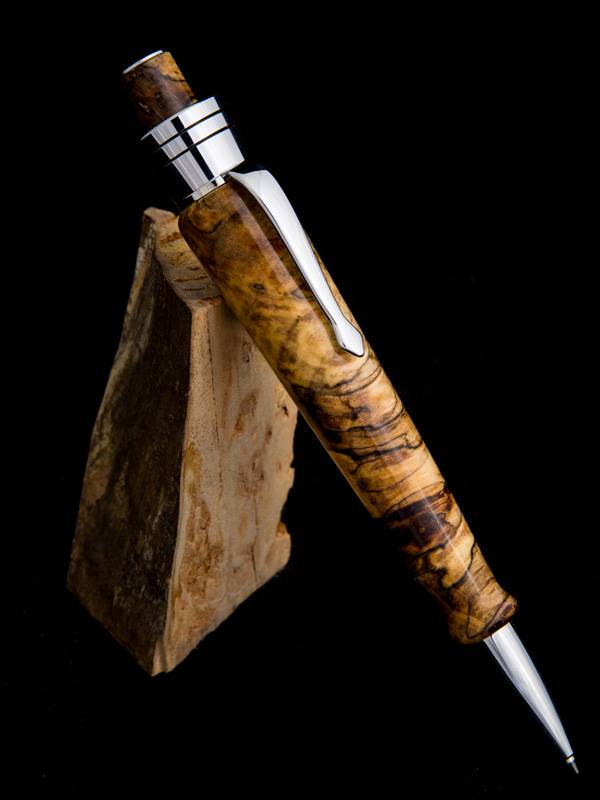 Mal,
I went back and read my post; It might sound a little critical but it was not intended that way. Your inspiration got my mind to going. My mind and words and typing couldn't keep up with where my thoughts were. That is an inspiration and so is Roy's above.
Thank you fellows for doing little things that make BIG differences and then showing them.

Roy, thank you for your comments. . I also have reservations about the sharpness.
You are right about not being able to do much about the height above the clip .... that is built into the design of the pen kit.

In fact, it was you, in the prev. thread that I referenced, who expressed your dislike for the height of the combined click mechanism and the finial piece that the clicker screws into. . To quote what you said :

"Is it just me, or do others find that Schmidt click mechanism (e.g. the one in the Blade) just too tall to be pleasing to the eye? The button height is ok, but I find the height of the metal base it presses into a difficult look to deal with."

Your opinion in that quote is what motivated me to design and make the cap piece. . But the cap could certainly be shaped a little differently to avoid the degree of sharpness. . But there is a restriction, which is the diameter of the button that pokes through the end of the wood cap.

A more symmetric resemblance to the nib end would be appropriate, though, and I will give some thought to that. . Of course, another constraint is the thin wall of the wood cap .... there is not a lot that can be removed .... perhaps just a little rounding to break the sharpness.

Modification of the metal pushbutton itself is a possibility, but that brings in other complicating issues.

Hank, I appreciate your comments also, and I want to assure you that they were not interpreted as "critical" in any adverse sense. . Your thoughtful and inspiring feedback is welcome, always.

When I saw the first exposure of this Blade pen kit on the Berea website, 3 or so months ago, I thought it was going to be a sure winner. . But now that I have done quite a bit of work with it, I see that it has some limitations which result from the way they have designed around the SKM-88 clicker mechanism. . I am now leaning more towards the PSI DuraClick EDC design, which also uses the SKM-88.

The Berea Blade appeared at first to offer more flexibility, and maybe that can still be exploited with a little more thought.