Stars and Stripes Gents for the Auction

I want to thank Ken Nelson and RTJW (Johnny) for giving me the chance to try this kit. The Stars and Stripes kit was donated by Ken Nelson (Laserturner and http://www.kallenshaanwoods.com/) as part of RTJW's children's hospital benefit auction.

The kit is intimidating when you first get it. Or at least, it was for me, a VERY novice woodworker/turner. But I followed the directions, and I think it came out pretty good! I learned some lessons along the way, and know to be even more careful with certain things next time (yes, I hope there will be a next time). But all-in-all, I'd rate it a success. I hope it does well at the auction! 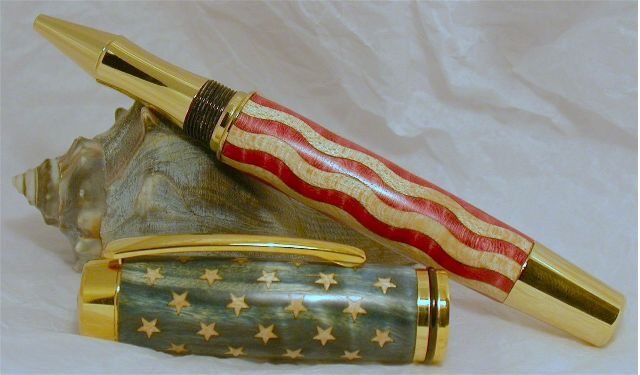 WOW! Nice job! Nice blank! I wonder where they got those itty bitty chisels to do the stars?[]
J

Jim, I swear, Ken must have gone blind just cuttin' the stars. I hear he's up late all night hand-cutting the stars. It's amazing how consistent they are.

You have done a great job and sure some of those deep pocket Texans will pay major $$ for that.
R

Wonderful job. Ken does a fantastic job on these kits and they are well worth it. I am going to have to be brave and try one.
O

Originally posted by Jim Boyd
<br />WOW! Nice job! Nice blank! I wonder where they got those itty bitty chisels to do the stars?[]
Click to expand...

OK JIM, now we need a tutorial from you on how to do those stars[}][}]

JimGo.. nice job.. it came out perfect... you did good...
I have two of those kits for Barons that I really need to get done...
P

Done right, those are always a WOW!.
J

I delivered a lapis pen this morning to a friend, and accidentally grabbed this one too (had the lapis in a box in my pocket, saw the box this one was in, and thought I'd left the lapis on the counter). I brought this to work, and everyone who has seen it has been amazed by it! This is one of those times where it's all in the selection of the wood and the careful design of the different pieces - none of which were by me! I wish I could take credit for it, but Ken makes it pretty easy to create a great pen.

Sorry the pics are so dark, but I really wanted to capture the depth of color - it's really a neat pen, and I'll be sorry to see it go, even though it will be going to a worthy cause!
W

I've only done one of these and I had decided not to do another because of how long it took me, but then I sold it so easy for a very good amount of money and have sense desided to make more. For the one that I did I used a platinum Statesman kit.

Jim, Great job on the pen.
Trust me, it gets easy after the 20th.
Seriously though, as Wayne said it's more time consuming than anything.
Thanks to all for the compliments on the kit.
This is also a perfect time for me to thank Bill and Kathy at Arizona Silhouette for their amazing blue and red stabilized blanks.
R

Ken, you have done a great job offering these kits for the contest. I appreciate it very much and will be ordering a couple for myself.

Jim, you must write up your lessons learned... you might be able to save some poor schmoe some trouble! (like...guess who?)
J

Originally posted by MDWine:
you might be able to save some poor schmoe some trouble!
Click to expand...

<br />
Now, why would I want to do THAT? I thought we were just here to show off our work!

I'm kidding, of course. Let's see, lessons learned:
1) read the directions carefully
2) Ken knows what he's talking about in the directions; follow his advice.
3) Take your time selecting the stripes and aligning them; oriented one way, they will fit with about 1/8-1/16 overlap - the other way, one end will be flush to just under-sized.
4) Do only one or two stripes at a time, and if doing two, do the ones directly opposite each other.
5) When gluing either the stripes or the stars, make sure the inlay is pressed well into the appropriate barrel. Although it doesn't have to fit EXACTLY flush, if it is oriented at too much of an angle, there will be gaps at the joints. If you look carefully, you can see the beginning of one where in the pic of the pen when open. It's in the first full downward-pointing portion of the top-most white stripe, where the white stripe meets the red stripe just below it. Had I turned that region of the pen any lower, the gap would have widened and been more obvious.
6) Both the stripes and the stars are slightly different colors on either side; if you realize this in advance, it isn't a problem, and you can decide whether you want them all to match or not (thanks for that one Lou!).
7) Adding more glue after the first application has dried will not soften the glue underneath and allow you to re-seat some of the stripes (see item 5, above).
8) When watering down the glue to the 50/50 ratio recommended by Ken, make sure you put the glue in the disposable cup first, then the water. Otherwise, you waste a lot of glue.

Like Ken said in his post, the next one will be a lot easier after having learned these lessons. I really only spent a total of about an hour, maybe an hour and a half, gluing the pen. The other time was waiting for the glue to dry. When you consider that the kit comes pre-cut, pre-drilled, and rough turned, I'd say it only took about 20-25 minutes longer than it does to bring one of our standard kits to the same point. IMHO, it's well worth the effort and investment.

Thanks Jim! This is definitely something I would like to tackle at some point. I'll make sure to touch base with you, Lou, and Tom before I start!

BTW, I think you did a great job, fit/finish look great! Good work!

Very well done. You should be very proud of that one.
K

Nice job on the pen