Sorry in advance for the really bad pics - I need to figure out how to take these! I've been on a kick lately to learn how to make different pen components myself, so I can start making really unique pens. As part of that process, I took a lost wax casting class at a local metalsmithing school. I thought at first that my wife would be reluctant to have me gone for several weeks in a row - little did I realize that she had an ulterior motive for saying I could take the class! The pendand and most of the rings in these pictures are for her, though there are a few pen CB's as well. I was most interested in learning how to work with the waxes, and how to do the casting, and machined wax wound up being easier than stuff that was hand-filed, so I wound up mostly focusing on the hand-made stuff so I could learn as much as possible from my instructor.

The pen is my first attempt at a closed-end pen. I'm not happy with the shape, and the fit between the cap and the base is intentionally bad - it's coming apart in a little bit. I just wanted to give an idea of it being a pen! Oh, and if Rich K. sees this, yes, I know the refill is missing! I made the pen using a Jacob's chuck and some pin vises made from HF transfer punches, with pins made from cut-off pices of Q-tips. The body is made of Ebonite, and has a bronze CB that I created during my first class. The pen will be getting small, round, blue topaz inlays on the top and bottom, and a bronze clip. The clip is cast, but I lost it in my shop - hopefully I'll find it some time soon. I'll also be making a custom writing "grip" some time soon.

The rings are either solid sterling silver or solid bronze. The "U" shaped ring has small rubies inlayed. The three rings in the last picture still need a lot of work - the left-most two will be getting Abalone inlays, and the stone will actually be set in the right-hand one once I've finished buffing and polishing it. Most of the rings need a good cleaning and buffing before they'll be "done", but since my class is basically over I thought I'd share what's been taking me away from pen turning lately. 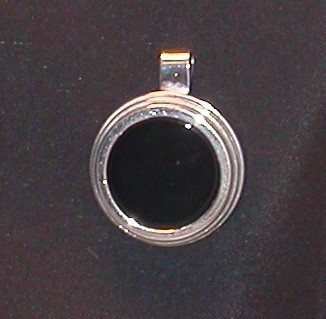 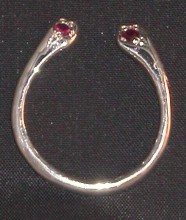 As always, comments, critiques, etc., are welcome (except, in this case, the "take better pictures" critique!)
Signed-In Members Don't See This Ad

Looks like Bruce Boone will have to watch his back [].

Awesome work Jim! good onya mate l bet your wife will be happy with them
also Jim how would you rate the coarse you done for $$$ spent. [^][V][?][]

Too many things to want to do, so little time. Awesome work, look like fun stuff to play with.
J

John,
The school I attended offered several courses, including the lost wax class that I took and one called "fabrication". The fab class might have been a better choice, because it deal with manufacturing parts from existing stock (e.g., sheet silver, silver tubes, etc.) rather than creating something from molten metal. In many cases, the pen parts can be more easily and less expensively created by fabrication than by casting. But over all, the class was very informative. I'll let you know how happy I am with the class once I sell my first truly custom pen! []

Sounds great Jim! and from what you have shown us l think you will do well with it []

Show off! Nice looking stuff, Jim! And like Paul said, so much to try and so little time.[]
D

CONGRATS!!! You are off to a good start.

I can almost see a "Gisi style" pen in the near future from you. [8D]

Nifty stuff Jim!! Nice work... guess we'll be ordering hand made kits from you before too long? Congrats!

Looking good Jim, when will you start taking orders for custom centerbands? Also, I want to know where did you setup the stuff needed for metal working?!?
J

James,
These were all cast in the school's shop. The equipment is rather pricey, and there are issues with working at home that I'll have to overcome before I can set everything up there, at least on the casting side. I did most of the wax work at home, though, including turning some pieces on my lathe.

Michael, the cast pieces also make a nice hissing sound when they go into the water for quenching! []

Oh, I should have included in my original post a thank you to Dan Furlano and Bruce Boone for their encouragement and inspiration in all of this. Dan is actually the one who pointed me to the class!

Sounds to me you need to do a little convincing of the wife that you need to attend the next fabrication class... after all she would be a beneficiary of it... right? Paul in OKC is a sage... too many things to do... so little time.
H

Pretty cool, Jim. I took a silversmithing class many years ago and we did some lost wax casting with a centrifugal caster. The best part was the night the mold blew up when the silver hit it. Imagine having molten silver flying around![:0] I decided at that point I probably wouldn't do that in my apartment. We also did a fair amount of fabrication and that was a lot of fun and quite enjoyable.

Good looking stuff Jim. There's a distinct but limited number of people interested in high end pens, but everyone has fingers! []
D

I wish I know how many fine writing instruments were sold in a given year.

I wonder what constitutes the remaining 66 percent of the industry?
D

A great start Jim. Just getting started with precious metal clay myself with some of the same goals. Like you, a few pieces of jewelry for LOML while we're really after pen parts doesn't hurt.

So when's the first group buy on bullion?
B

Jim,
Man, you've got your hands full. I thought you would post a pic of one of your canes. I hope to post something soon, but today was my first day turning in about 3 months. Coat racks.

I like the concept of the bottom row.
Rob
J

Rob, Glad to hear you finally felt well enough, and had the time, to turn! Be sure to post pics! I would post pics of my canes, if I had any time to make them! lol I have those two big pieces from you still sitting in one of my many wood storage areas.

Bruce, I'm game for a group buy on casting grain - but I don't know how much of a discount we'll get! I'm anxious to see what you're able to do with PMC - once I get a kiln, I hope to try that, too.

I have a bunch of books I got on the process. I was all set to get all the equipment when things stayed busy, so I never got a chance. It looks like a very worthwhile thing to learn and perfect.
A

Jim, don't you just need to stand still and turn around 360 degrees to search your entire shop for that clip? I wouldn't think it'd take you too long to do a thorough search![}][}]
J

LOL...I wouldn't have thought so either, Angela! I actually lost a lower-barrel to the pen as well. I searched for 45 minutes (without tearing EVERYTHING out) and couldn't find it! My guess is that it fell in the foot of my drill press, where I can't see or get it. Hopefully the clip is in a less troublesome spot!