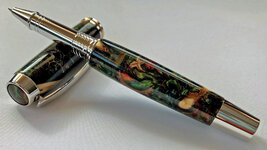 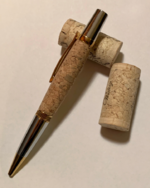 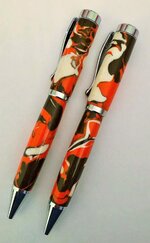 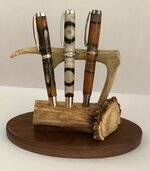 Kind of a weird combination when you put it all together. These are a few of the pens I've recently made.

The first is a Smurf watch part pen of blue and black woven Kevlar. My wife claimed it even before I made it, as she looked over the watches I had stashed.

The second is another one of the wife's pens. She asked me to make a cork pen for her years ago. I finally finished it. I epoxied two wine corks together, drilled and epoxied the tube in. I turned most of it with carbide tool and then sanded the rest to shape so I didn't blow it up. No finish applied.... just the feel of cork.

The third pen was a donation pen I made, which raised $200 for a scholarship fund. I entered it in this years bash since I had a pen done for once. Was happy to see it win 3rd place - thanks for your votes.

The fourth pen set were made from some retro colored casts I made that didn't make the cut for selling. My wife and her close friend own them now. (are you seeing a pattern here?... I don't own many)

The fifth pen is flag cast I made for the carbine pen. I'm making several of these to donate to the local American Legion.

The last set is a piece I entered in an art competition this past weekend at the Illinois Taxidermy Associations yearly event. The requirement was it had to be made from real animal parts..... Clear cast Ringneck Pheasant Feathers, Whitetail Deer Antler in resin, and clear cast Corn Snake, (the corn snake pen was made and show on here a while ago, but it fit the theme and is one of my personal favorites.) The base is an Elk Antler and the back rest is a small whitetail deer antler piece on a walnut oval. I was proud to win a 1st place blue ribbon.

Sorry the pictures aren't better. I took them with my cell phone. All comments welcome.
Signed-In Members Don't See This Ad

That's a wonderful set John. All have their merits, but I love (and voted for) the cast blank - #2. The cork pen is intriguing. No stabilization

! That I've got to try when my hands are steady. Smurf is great as expected, and the animal parts are superb.

Thanks for sharing. I love seeming your "compilation posts," a lot of artistry to chew threw!

Great looking pens. I acquired a number of wine corks awhile ago and have been waiting to try making a blank from them. Now that I have some direction I'll give it a try.

All are very very nice. The cork one, that one blows my mind. Great job.

I need to try one of those cork pens for my brother. He works for a wine and beer distributer and that would make a great conversation piece.

Wonder how well it would float? He fishes a lot and I can see him dropping it in the water, lol.

Especially love the pen stand supporting the animal-theme pens !! . Would like to see more pics of this stand from all sides. . Any chance ?
L

All are really good, but the pen stand and pens in it get my vote.

Thank you all, I will say the cork was challenging. You cant see it very well but the body is 2 corks. I cut the ends off and used 2 part epoxy and a small bar clamp to press them tightly together over night. I made very light cuts and used 80 grit sand paper to shape most of it. Once it was close, I worked my way through the other grits up to 600 to smooth it out. The wife wanted to feel the cork so I opted not to stabilize it. It came out a little dusty looking but she likes it.

Here's a few more views of the antler base. I think it would be a real nice addition for you guys doing shows, to line it up with nature themed pens. I began by cutting a small piece off the bottom so it would sit flat. I ended up belt sanding it level. (make sure you wear a mask and open the windows). Then I drilled a hole for the back rest antler to fit and epoxied it in place. The back side had a wider part from where the first tine was cut off. The next day I drilled the bottom holes and wrapped the drill bit with sandpaper and sanded the back rest grooves. I rubbed the antler down with #0000 steel wood to clean it up then hit it with 2 light coats of semi gloss lacquer to seal it. The antler is held down with 2 counter sunk screws from the bottom.

One thing I would have done differently if I do it again is to cut the antler backrest (far right end) at an angle (opposite to a miter corner) to hide the open marrow end. I hope this sparks some ideas. 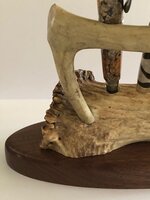 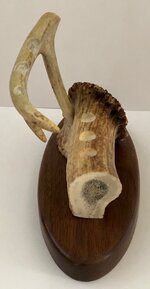 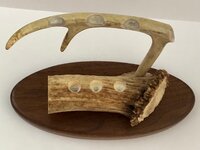 Thanks for the additional pics, John !

One idea for the backrest, hoping there is enough material .... allow cut end to extend a little bit and then do the reverse miter cut .
I would have to try out that idea to know if it would be aesthetically ok.
A

Love your work, John.
Your stand is outstanding.
Alan

The Mother Nature pen is without doubt my favourite. I think it’s just stunning.

Very nice job all the way around. The pens are very nice and now that I've seen what a cork pen looks like maybe I can do something with the big bag of corks I've got.

The Antler stand is outstanding. I get a lot of sheds where I live and never quite know what to do with them, I know now. The best part is I scored another display case yesterday and was wondering what kind of stand I could incorporate. You've given me a great project to start on. Thanks for sharing.
You must log in or register to reply here.
Previous Next