WARNING: We are about to let the big dogs out to play! If you need to put your entry from the kitless contest in the house or kennel to keep it safe, please do so now!:tongue:

There will be one round of voting for this contest. Please select your favorite three.

A one-piece Slim Line made using the inside-out turning process. The center tube is Maple. The body is Jatoba. The tip and cap are Rosewood. 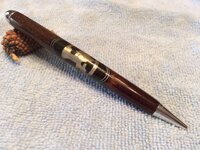 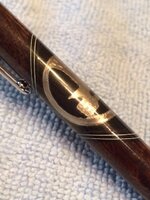 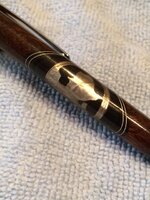 It is a single body pen made of Texas Ebony Wood with a real Texas State Quarter inlaid and cast in the center. For accents between the wood and quarter I used aluminum from a soda can. To extend the cartridge you twist the nib. 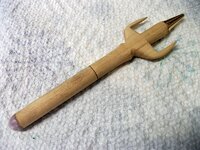 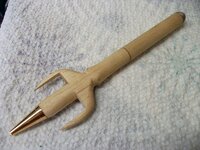 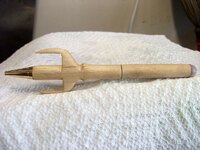 This is the loaner Poseiden got while his trident was in for maintenence.Maple with a lavender and white butt. 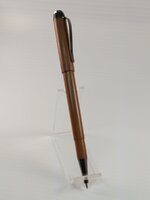 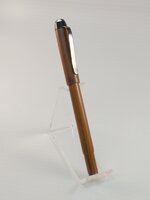 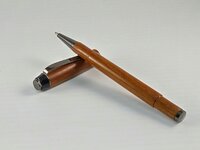 Its made from a hunk of African Rosewood. Its a Capped, Postable Gunmetal Slimline. I used a Cigar clip and tube for the cap. The point stays out all the time since it's a capped pen but due to the shortened length of the pen, twisting the nib pushes on the back of the pen pushing out the nib and giving you something to grab on to. 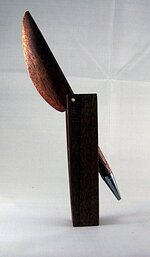 This is made of mahogany and is to serve a dual purpose of being a letter opener/pen made to look something like a pocket knife and stands the desk as shown in the first picture. 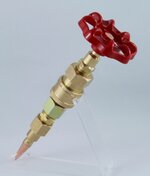 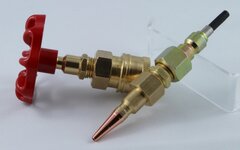 I used a slimline kit with copper-plated parts, retaining the nib, the finial, and the tubes, and discarding the clip and the centerband. The barrel is assembled from brass pressure washer connectors, each shaped on the lathe, or drilled, or reamed as necessary to accommodate the brass pen tubes, refill, nib, and finial. All the parts used are commercially available. The red tap handle at the top end is also a commercially available part, modified to fit the design.
By turning the red tap handle the refill tip is extended (clockwise) or retracted (counter-clockwise). The first two pictures are views of the functional pen. The third picture shows the pen separated at the middle so that the refill could be replaced. Separation is effected by means of the central two-piece pressure washer coupling after sliding the center ring back. The black plastic top of the retracted Cross refill can be seen in the third picture. The overall length of the pen is almost exactly 6" and the pen weighs just under 190 grams. 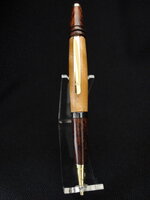 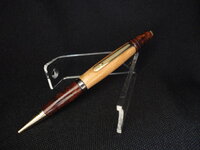 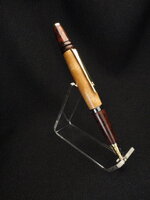 This is my entry into the The Slimline Unlimited Contest. The pen kit used is an Artisan 10 k Gold Slimline Kit modified to the dimensions of an Apprentice Classica Pen Kit using all of slimline components except the centre band . I used bushings from the Slimline and Classica Pen Kits. Modifications made to make this pen were the gun metal centre band found at a local craft store, the pen clip centre diameter had to be enlarged with a round file to allow it to be slid onto 7mm brass tube. Filing of the main blank was made to allow the clip to fit nicely to the upper blank. Pen Blanks used for this pen are believed to be Indian Rosewood and Satinwood, from recycled pallet wood from India.
Last edited: Aug 24, 2015
Signed-In Members Don't See This Ad
S

You fergot the poll?

I can see it. Can anybody else see it?
S

Can see it now, and already voted.


Great pens all round, in every contest ...

wow thats some serious talent that went into making those pens.

This unlimited contest has really brought out the creativity.Way to go challengers of the slimline.
A

Love the unlimited contests. I guess I should have thrown an entry together( I think I have the other end of that left over string from before


congrats to all the entrants, amazing work

This is a really great bunch of entries. How come a lot of people haven't voted yet. Maybe all the cat lovers are boycotting the voting in protest?


Don't worry all the Contest Chairs do, you're the only one with enough dignity to admit it though!:biggrin:

When does the voting end?

oops - forgot it was at the top

WOO WEE Folks we have a tight race! Only one vote seperates 1st and 2nd and there are only 12 votes difference between 1st and 4th. Get your votes in.
S

I see a lot of big dogs .... are they housebroken or do they break the house?

I have a horse in this race.
S

I have a horse in this race.
Click to expand...