Section for a Lamy Nib/Feed

I have a brand new Lamy nib and managed to source a feed from China (by way of Etsy).

I now have both but found the feed a pressure fit (no threads) and I've never done that before.

The majority of the feed that will sit within the section is 6.3mm OD, but it has one "bump out" area that is 6.5 OD.

I'm afraid that if I just drill a hole and slide it in that it will rattle or sway in the section. My worst fear is that it will fall out.

Place the nib on the feed and very carefully push it in to the section. Make sure you line it all up properly before you seat it.
A

In the past when I’ve asked the same question most people say don’t bother, it’s really hard to do correctly. Most people purchase a nib unit that can thread in (such as a Jowo or Bock) and drill to thread it, rather than attempt what you’re describing.


Sent from my iPhone using Tapatalk

I found some scrap blank and drilled both the 1/4" and F and tried to slip the feed in.

The F was a bit loose but not as bad as I described above (move around or fall out). I did find that when pulling the nib off the whole feed pulls out.

The 1/4" is pretty tight. The nib isn't going anywhere. I found the feed is entirely 6.3mm OD and the 6.5mm is sort of a graduated fin so it fits tightly. Maybe too tightly, though. When trying to remove it I glubbed it up. Luckily I bought a bunch of feeds.

BryanMurphy said:
1/4" functions, but between 1/4" and F there is likely a sweet spot that eludes me.
Click to expand...

I’ve changed out feeds on Lamy Safaris and I can tell you that the fit is very, very tight.

I have not played around with Lamy.
Check if the actual feed is round. With the nib on the feed, it may create a slightly out of round pair. So you may need to make a tight hole, then use files to remove material to match the shape.

I put together something that seems to work. It works with the Lamy T10 refills. I have a Lamy Z26 converter that should arrive tomorrow. That will be the moment of the truth.

I haven't put threads on it yet, but I have plenty of material to work with.

Drawing notes: My drawings aren't to scale, and I work in MM. 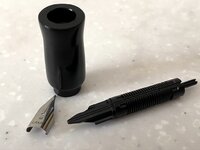 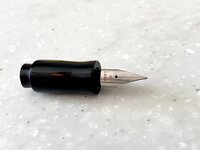 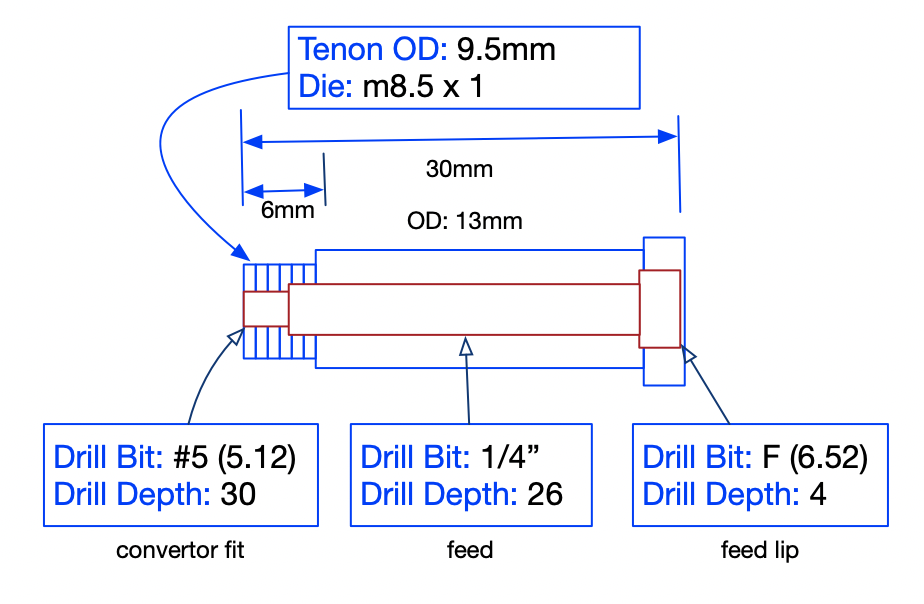