For a while I've wanted to make an entire pen out of some of the old cellulose acetate tubes I have. Some of it is wide enough to make a full pen from but some, (usually the really nice stuff), is too narrow to make the cap from. I have used it in the past to make the barrel and sections but always used a complimentary colour for the cap. For reference I am talking about materials that are around 12mm in diameter and the caps I make typically tend to be 15 or 16mm in diameter.

I decided that one way to do this is to have the cap screw onto the end of the section so it just covers the nib, rather than enveloping the entire section as most pen caps do. This is not a new idea, it's been done before, but it was the only way I could think of to solve this particular challenge.

I made a couple of pens to test out the idea and then today I finally made one from the old cellulose. The cellulose was approx 12.4mm ø to start with and the finished pen is 12mm ø so it was quite an exercise in precision. The section is fabricated from an acrylic insert with the cellulose as a sleeve. It has a slight pinch that measures 11.4mm ø. The thread sizes are 10mm for both the barrel and the cap. I made the section -> barrel tenon a fraction bigger than the section -> cap tenon so there is more friction and less chance of unscrewing the section when trying to unscrew the cap. (This actually works very well).

It has a Bock no5 nib and the pen measures around 138mm in length. 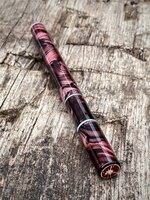 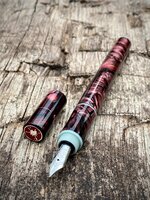 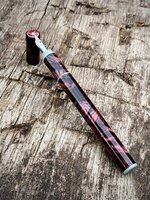 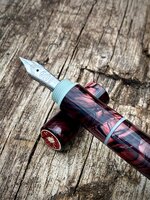 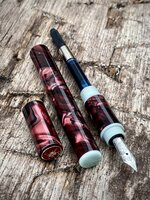 Very nice. I made my first kitless that way so the threads were out of the way. I really liked it until I crushed the cap while closing my laptop.
You are right, it has been done before, along time ago. Some of the original fountain pens were called safety pens. The nib retracted into the body and the short cap protected the user from ink spills.

Very nice. I am going to have tp try this.

Ash, you surpass yourself with every pen.
Great work