Our local community center has a wood shop, and the woman who manages it gave me several "cut-off" pieces of cherry, as well as some Purpleheart (always nice to get free wood!). When she gave it to me, she told me her favorite wood is Purpleheart. I promised her that I'd bring her a pen as a token of appreciation. Well the weather didn't cooperate last week, and though I promised I'd bring it on Saturday, I'm just finishing it tonight. I'll be dropping it off on Wednesday, when she's there again.

I wanted to do something a little different, and to really "jazz up" the Purpleheart, so I stuck it in the toaster oven for a while. Although the pic below isn't clear, you can see the difference in color, which was the point of the pic. The part in the middle is the cut-off from the blank. I cut and drilled before I heated it, and the color change went all the way through the blank. I baked it at 350 for 5 minutes without seeing any change, then upped the temp to 400, where the blank sat for another 10 minutes or so. 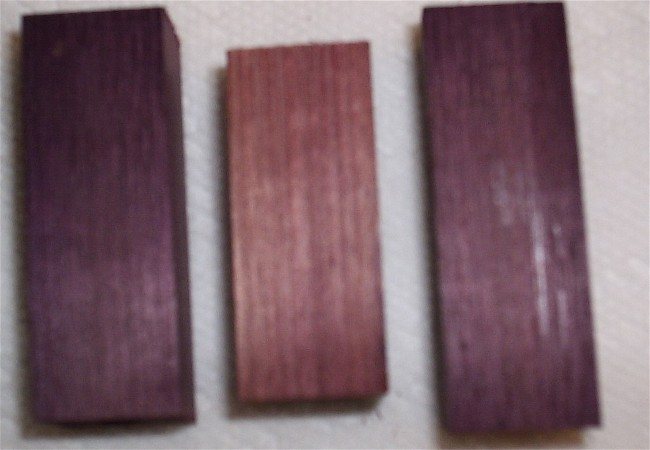 Any way, this is my first attempt at beads and coves that I've actually taken all the way through to a complete pen. I think they came out OK on this one. It was meant to have a centerband, but I had an "issue" when I went to glue up the upper half of the pen; the purpleheart was still hot, and the CA set up REALLY fast! The tube got stuck 1/2 way in the pen, which was very frustrating! I cut the tube off as tight as I could, then glued the other part into the other side. Of course, that left a gap in the middle of the upper blank about the width of my bandsaw's blade. I didn't realize that it would be a problem, 'till I tried to slip the upper half onto the transmission. Of course, with my luck, and with the CB in place, the top of the transmission sits in the gap between the tubes! Without the CB, it is great, nice and tight, but with it, it is too darn loose. So, it's going without a CB!

Hits/tips for my next time?

I like it, Jim. Slick design. I use epoxy for just that reason. I know many think it's too messy, but I've been using it since my RC days and I guess I developed a technique. I tried CA on one a few weeks ago and almost got the same result you did. Probably because I was too slow trying not to get any on me. I don't have that problem with epoxy. I get everything prepared, mix up what I need and go (5 or 15 min depending on how many blanks I'm doing). We all have our favorite techniques.
J

Billy, I usually use Gorilla Glue, but since yesterday was my first chance to work on it, I needed to get it done the same day if I was going to even come CLOSE to meeting my promise of getting her a pen by (this past) Saturday. It's yet another reason for me to stick to Gorilla Glue! [] I know others use CA for most of their glue-ups, and I'll probably use it for quick turn-arounds like this again, but I think I like Gorilla better with as accident-prone as I am!
D

Very nice, Jim. I'm sure she will love it. But you guys gotta quit admitting to oops bands. If I salvage a pen, it's just a mid-creation design change! []
R

Very nice design. That is one of the few slimlines I have ever really liked.
W

I'm with Lou! I haven't turned nearly as many pens as I'd like...but I a fair bit of experience with mid-creation design changes... []
J

Now that is different. Good concept.

I have heard that heating will speed up the 'purpling' process with purpleheart. However, time and exposure to light does the same thing. Eventually, the wood will again become dark, almost walnut colored. I would think that by heating you are just making the pen closer to the day when it will be dark brown again. Personally, I prefer to let nature do it's thing.

I just cut up some purple heart into blanks yesterday. The cuts will always turn brown. I put the 5 blanks out into the warm sun for about 45 minutes, and they were purple as can be again. I might try the oven thing. Looks like you had great results

Originally posted by DCBluesman
<br />Very nice, Jim. I'm sure she will love it. But you guys gotta quit admitting to oops bands. If I salvage a pen, it's just a mid-creation design change! []
Click to expand...

I agree Lou,
And I call them desgn changes in real time []
H

Jim, very cool looking pen. I would like to try some beads and coves, but I haven't had the nerve to try it yet. Thanks for letting me see what is possible. Actually, I like it without the CB. Makes it more unique and that is what you can tell here, instead of the CA fiasco...[]