Im just curious as to the date for our November meeting. I have been working here local and will be for a few more weeks (I think) I have a propane heater I can bring.

We can meet at my house

Hi Guys. All are welcome to meet at my house next Saturday 11/16 if that works for you guys. Like before, we can start around 10 am and go until whenever. I have a heater for my garage so we should not have to worry if it's cold or raining. I need some volunteers to do demos please.
I live at:
41 Bouresse Ct. in W Little Rock.
Let me know whos coming, so we can have a headcount. All that I ask is that you bring your own drinks, we will cook some burgers or whatever.
Thanks and let me know.
John Pierce
(501) 353-7739 (mo)
T

I hate to say it but I have to work again. Have a good time, Ted

Sounds like a plan! By the way, see ya tomorrow!!!!

Scott (pignut is fun) B

I believe I can make it to this one.
D

Well glory be! (as my momma would say)

I just got on line to check on you guys! I haven't heard from anyone & I thought you all might have passed on.....I don't know about next Saturday but I will check back by Wednesday if not before....:biggrin:

Ill be there. My wife's out of town, the Razorbacks have a bye (pretty much had one all season), perfect timing for me. Are we having a pen trade?
K

I can make this one yeah! Maybe I can bring a new turner too.
D

Leaving today for south Texas. :-( I hope to be back Friday. Last week got in at 3am. Still plenty of time for me to get to John's. Hope to see yall there
M

Swear I can never make it to one of these. It always seems like they are while I'm afield, or the Sat. when I get home on Sunday. Oh well, I haven't turned anything in so long, all my tools are in storage. This sucks, lol!

I have been busy on & off for the past 3 weeks with a woodworkin' project..I am still not sure if I can get away to run up there for the meeting on Saturday....(I really need a little more notice to get my ducks all in a row) I like the idea of the PITH (Pen In The Hat) or pen swap!
Also, I think show & tell is very informative & educational, that one idea
that you may pick up or learn about, may be the one thing that changes your turning drastically! I really want/need to see that live edge demonstration, I tried one but had a lot of truble sanding the end grain...
Well, I have about talked myself into makin' the trip but I will have to leave before dinner time...I posted the pics in "Other Things We Make" but wanted to share them with ya'll as well...

I plan on being there and will be bringing my cartridge assemblies for sale.

I hope to make it. I'll bring a pen, but I cannot teach much since I have not been turning long. I wish someone could show me about turning pens "between centers."

Clayton said:
I hope to make it. I'll bring a pen, but I cannot teach much since I have not been turning long. I wish someone could show me about turning pens "between centers."
Click to expand...

Hope you do....I'll try to remember to bring the pieces to show you.

Scott (hope it doesn't rain too hard) B
D

Im in wooo. Ill be there. Lovin the wood chips (and acrylic)

Had a great meeting today.

The first demo was by John(who also hosted this get together at his home)...turned a great bowl from an old Southern Red Oak crotch. The jig he used on the bandsaw cut a near perfect disc that made the actual turning a lot easier....thanks John, guess I have another tool(toy) to add to my growing list!!

The bowl is going to need some more drying time before finishing....but you can get the idea from the photo's what it will end up looking like.....I hope?

And here is a another bowl he started to turn....

I didn't get a chance to get any photo's from Bob's demo, but he showed everyone how to make the custom finials for JrGent 1 pen kits(which could be applied to any pen kit that you can 'pop' the finial out of), and then he amazed us by doing the tiny trim ring that goes between the two pieces on the cap. And he did this all from one PR blank!!!!

Well I was in LR but was unable to attend the "turnin"..was @ Children's Hospital instead helping watch over grand-daughter that arrived 6 weeks early unexpectedly! Let me know about the next one & I'll try to make that one...
also, I have a almost brand new Shop Smith that I need to sell...$2,500.00
I will post pic when I get back home next week...
B

Thanks for the pics Scott. The demo was outstanding. I will be trying out my skills today on making that little ring. Thanks Bob.

Great pics Scott. Except the one of me holding John's lathe to the ground.

This was a really good meeting, and thanks to John & Mary Lynn for feeding us, and hosting the meeting.

Maybe for the next meeting, it can be out of the LR area so it would give a break to some of the ones that have to travel so far. Just a thought.

Oh, and John, I'm getting you 2 bags of sand from HD for Christmas.:biggrin:

I couldn't take my photo while I was holding the lathe down, we'd have probably been seeing the ceiling as out of round as that blank was cut by whoever did it.....


Instead of sand bags....maybe four bolts? After all, I bet that lathe has them?(Mine does)

I had fun and learned a thing or 3. Thanks to John for hosting. Bob that was one tiny ring for that trim. I guess I will be practicing. Swmbo likes the blanks too thanks mrs Lynn

Here's the pen I finished with the custom finial & centerband. I think I'll end up making it a roller ball. I have an order for a fountain pen (a freebee pen), and this stock nib writes perfectly. And I don't have another chrome fountain pen in this model. 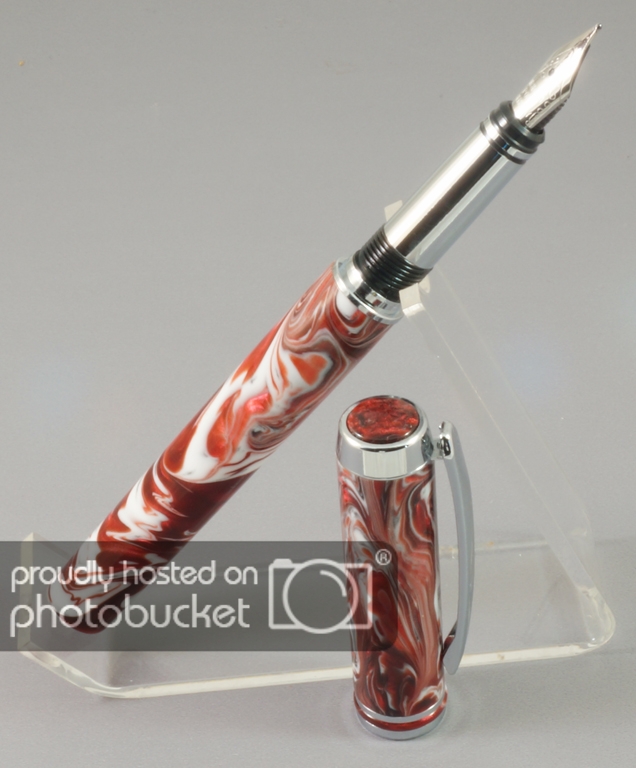 To see the rest of the pictures go to the SOYP section. Or just click the link.
http://www.penturners.org/forum/f13/whats-ring-117896/

BTW, there is about a 90% chance that this will be my PITH pen for the next meeting. You can't win if you don't enter, and present.:biggrin:

Did we ever get to the part of where it will be?
Or should we just keep the next meeting a secret, that way I can get this one?