Hello, I couldn't find a forum that seemed specific to laser engravers so I'm hoping this is the right place.

I have a Neje 1500mw laser that is about a year and a half old. When I first got it, I was just doing small engravings like names which seemed OK. After a while, I got a rotary jig which seemed to work at first but soon seemed to get hung up and wouldn't always rotate as it should. I tried everything that I could think of (smoothing and lubing the contact points, tighter rubber band, etc.) but it still seemed to have the problem. I hadn't really done much in the way of flat engraving (without the jig) but the few small things I did seemed to come out OK so I was assuming the problems were with the jig.

About a year ago life got crazy and I wasn't really doing much in the shop. A couple of months later we decided to relocate and the laser got packed up and has been sitting in a box until this weekend when I went to a local woodturners group's meeting and they had a laser demo. Today I was determined to get out the laser and figure out what was wrong having been given some suggestions from the group.

I wanted to eliminate possibilities so the first thing I did was to engrave a large detailed flat piece assuming it would come out fine and I could then focus on the jig. Well... that's not what happened. It turns out that the engraving will work fine for a while and then would jump in the X axis and the remainder of the engraving would not line up.

Here is a scan of a blank I did before the move. Notice the straight vertical line. Essentially it and the engraving to its left was all I got on the first pass. I made a second pass and the full image was engraved. This was typical of what was happening quite often. 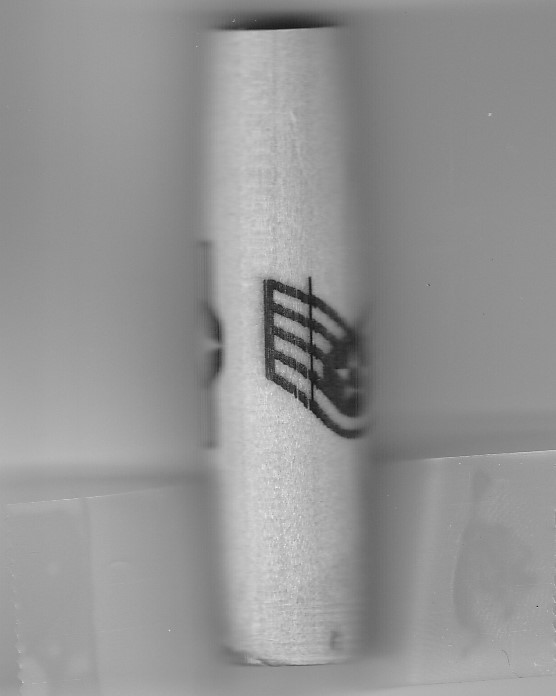 Here are a couple of scans of engravings that I made today. In this first one you can see a significant shift down near the bottom where the fawn's legs are. (You can also see a shift that duplicated some items at the very top but that was from a second pass I began to try to identify another issue I was seeing -- missing spots in the engraving -- that I think was just due to the difference in reflectivity in the various particles of the material I was using.) 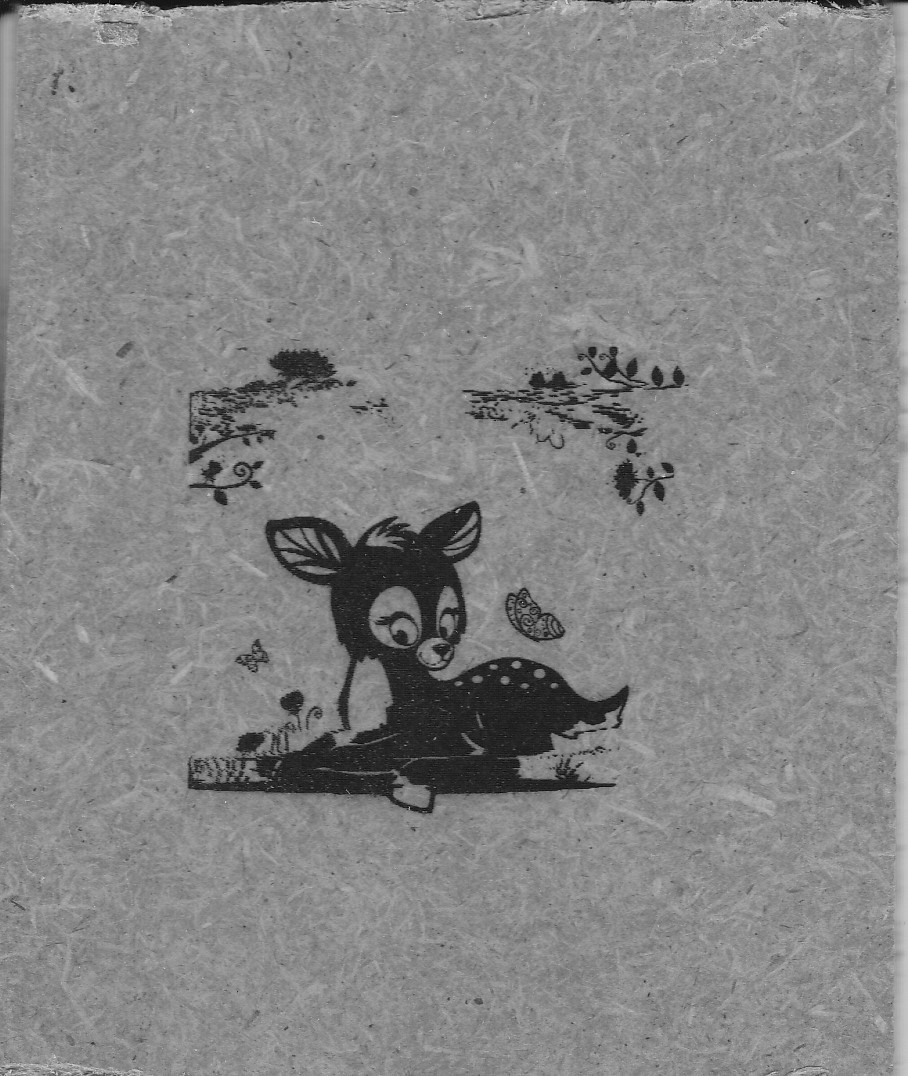 Here is a second where the shift is very obvious. (It is lighter at the top of the head as I turned the burn length way down to speed things up and then turned it back up once it looked like it had shifted.) 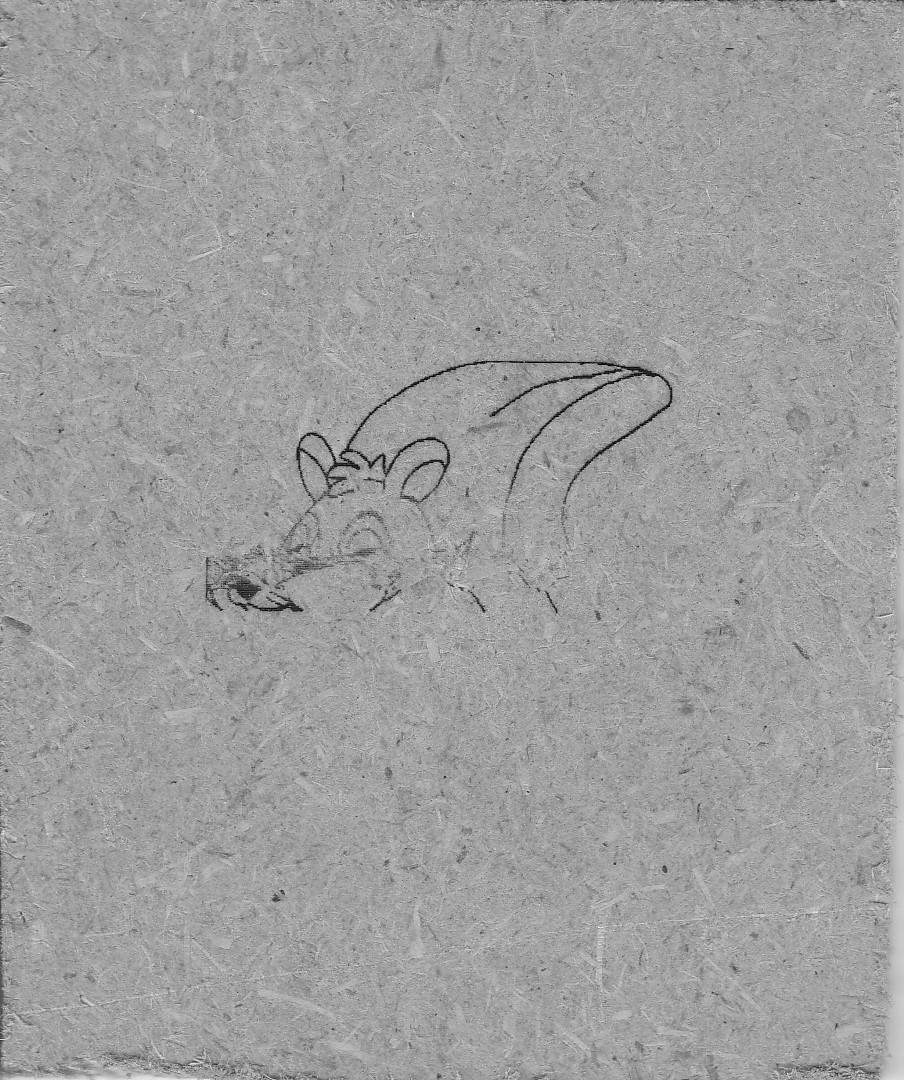 I have upgraded the driver and software to the latest that I found on http://neje.club/dbl.htm. (The fawn engraving was done with the original software and the other was after upgrading.) The material was securely fastened to the laser's work plate and I was careful to make sure that the laser was level and not bumped or disturbed in any way during the burn.

Has anyone ever seen anything like this with these engravers or have any ideas on what I might try. I'm planning on contacting Nancy with NMC Lasers for suggestions but their website says they are on vacation until the end of the month so I thought I would start here.

I'm not sure what kind of warranty these engravers have but I'm sure mine is way out of it and a new one just isn't in the budget right now. Thank you in advance for any help you may be able to give me.
Signed-In Members Don't See This Ad

Go on Facebook and sign up for the NEJE engravers site. You have to be accepted into the group.
Lot of good information
J

I agree with Gimpy. Lot of help there. When I joined they approved me within seconds. Here is a link to the group, and good luck. 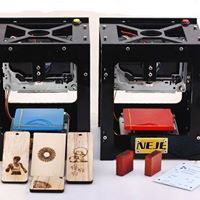 Thanks. I’ve signed up and already gotten some good suggestions!

Thanks much for the help. The fine folks on the Facebook group knew just what the problem was and all is well now! (Now if I could just fix my water softener that easily I'd be a happy camper!! )

What was the issue?

It needed to be cleaned and lubed. I used canned air to blow off both of the drive screw rods and all the guide rods and then applied a drop or two of 3-in-1 oil to them. Turning the machine on and off a few times after that so that it would cycle through the full range of motion seemed to do the trick.