I wanted a practical, functional EDC pen for my desk at home. This pen isn't pretty, but it feels good, the mechanism works, and it writes well. Good enough for now. This is a story about overcoming obstacles.

We have a Brazilian Pepper tree in our backyard. It is huge. A dried-out branch broke off, and I salvaged five reasonably straight pieces from it for pen blanks. I turned the smallest one, too small to be a pen, and it was full of color and texture, like cedar. I dripped candle wax on the ends of the remaining blanks and left them on stickers in my garage to dry out for six months. This pen is made from one of those blanks.

I roughed and glued the pen tube inside the drilled blank.

Murphy's Law #1: Glue Too Old
My small bottle of Gorilla Glue was not right. It came out thick and hazy, not brown/clear. I used it anyway and got away with it. It foamed as usual, and the dried glue on the outside was hard. I threw away the bottle. (In retrospect, I could have cleaned off the tube and applied one of several other glues on hand, but I got away with it.)

Murphy's Law #2: Cut Off Part of the Tube
To save wear and tear on my pen mill, I measure the depth of the tube inside the blank, mark it on the outside, then cut just outside the line. I have been angry with myself for tensioning the bandsaw just to cut a pen blank, so this time I used a Japanese hand saw to cut the end of the blank. I thought I stayed far enough outside the line, but I didn't. There was a very thin ring inside the cut-off, which means that I also lost one kerf width of tube. I measured the tube inside the blank. It was slightly short, but I thought I could get away with it. I was wrong.

Murphy's Law #3: Turned Blank Unimpressive
After seeing the beautiful colors of my test blank six months ago, I expected something similar. After all, it came from the same branch, right? I was wrong. The blank got more and more bland as I turned it down. I finished it with Hut Crystal Coat.

Murphy's Law #4: Pen Refill Tip Stuck Out after Assembly
Yup. You guessed it. I am not that lucky. The retracted tip of the pen was barely visible beyond the rim of the pen tip, perhaps 1/128 inch. Just enough to be not right and not useable as it was. Dang!

Murphy's Law #5: Sanded the Spacer Piece Too Much
I hand sanded the little white spacer to shorten it so the pen refill tip would retract enough. I tested a couple times. The hand sanding was too slow, so I spun up the belt sander. I sanded off too much. Now the extended tip was barely visible beyond the rim of the pen tip, perhaps 1/128 inch. Dang!! Double Dang!! ... and Penn State doesn't include extra replacement inserts. What do I do now? Time to give up? Steal and grind an insert from another kit? For this ugly blank?

Fixed and Working, Finally:
I made a replacement spacer from a thin dowel and a cut-off finish nail. It took many tries to drill a perfectly straight, centered 1/16 inch hole in the end grain of a thin, cheap dowel. I pressed a finish nail into the hole, cut the nail with heavy plier wire cutter, then trimmed the dowel on a tiny handheld miter saw. To my surprise, my homemade spacer worked.

Now I have a functional EDC pen for my desk at home. I may make a better one someday, but this one feels and writes well. Finally. 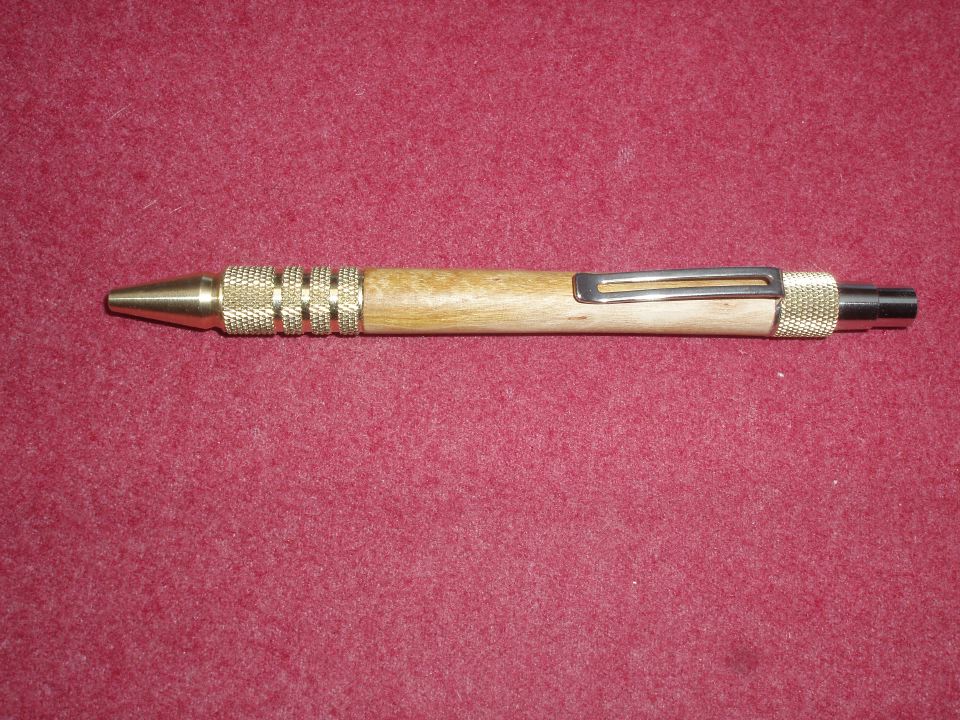 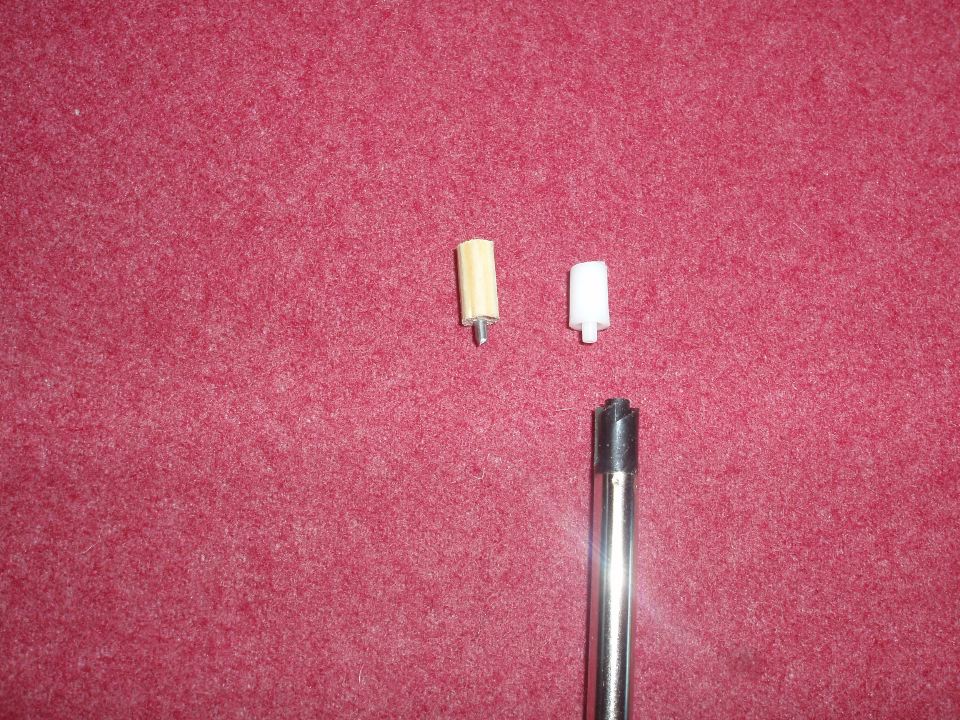 Turned out nice. You are right though, it is bland. Forest Gump was right!

Sign in office- Compare to me, Murphy was an optimist!
Nice pen. We all go through those situations at one time or another.
P

Here is a photo of the pen next to the original test blank. Both came from the same branch of the same Brazilian pepper tree. Both were sanded and finished with Hut Crystal Coat. After seeing the beautiful coloration in the test blank, I was eager to turn this pen. Oh well. 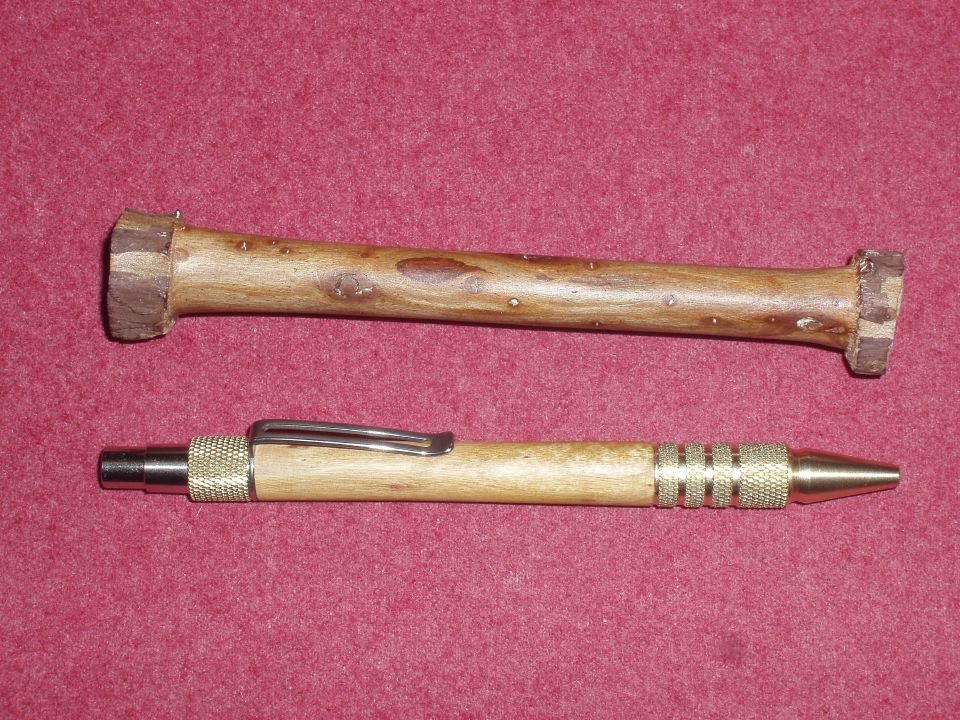 Well you've got a nice pen and a great story to tell behind its making. I've found that sometimes what you think will happen with wood doesn't. I've got lots of scrap pieces that I thought would be nice but once turned they didn't make the cut. Something I learned is that it doesn't always matter if you go through the exact middle of the branch with your blank hole. I've gone off center a a few times and the outcome has been interesting.

#1 rule above... I use System Three epoxy that I've had for well over 10 years. It's gotten frozen and thawed a few times and was unaffected. Holds as well today as the day I bought it. And a quart of part A and pint of part B goes a long way. You might consider giving it a try some time.
P