Hello, just wondering if anyone knows where to get ink (piston) converters for Elite 2 and Classic Style fountain pens. I am aware PSI sells some in packs of 5. Does anyone know if Woodcraft or office stores like Staples sell a compatible converter for these types of pens. Thanks for the help!
Signed-In Members Don't See This Ad

PSI has two grades of converters (both 'international standard'). I have used both, and I recommend only buying the more expensive grade. The cheaper ones work, but they don't last as long.

There are a number of other suppliers of 'international standard' converters, with a wide range of features and prices. The better designs include a small weight (either a ball or spring) that slides inside the converter when you change the orientation of the pen to breaks up the surface tension so that when you point the nib end of the pen down, the ink automatically flows to the nib. Absent a ball or spring, ink can puddle at the other end (especially if you have been carrying the pen in your pocket which generally means in the nib-up orientation). There are also better designs in which the metal shroud at the back end of the converter is threaded and screws onto the body. In cheaper designs, the back end is either a press fit or is glued onto the body. The advantage of having a screw-on shroud is that you can disassemble the converter (without destroying it), and put a little silicone grease on the plunger to produce smoother action and less leaking.

Most good pen shops will carry a selection of converters. I've seen them in Staples, but the stock in the big-box stores can vary considerably from one store to the next.

Get the best quality one you can find. I swap the ones out that come with the kits and put only good ones in my pens. It is well worth the little extra that they cost. I get the ones I use from PSI.
Paul

I use the Schmidt brand converters. Try them, you will be converted. Sorry, couldn’t resist. Their are several models available. The K5 is the one that fits most pens. The K2 is slightly smaller near the tip and fits those sections too tight for the “standard” sized converter. My new favorite for custom kitless pens is the K6 which has a threaded lower barrel for a very secure connection.

More4dan said:
My new favorite for custom kitless pens is the K6 which has a threaded lower barrel for a very secure connection.
Click to expand...

Many years ago, I sent my MontBlanc pen to the repair facility in Pennsylvania to be rebuilt (a rather expensive repair that had to be done every 2-3 years - which is why that pen is now in the 'retired' collection and is no longer used). When it came back, it came with a screw-in converter. I thought that this was a neat idea, but at the time it apeared that MontBlanc was the only company that offered it, and only for MontBlanc pens.

So I'm curious - I found the K6 converter in the Schmidt catalog, but I noticed that the threading was not specified. Were you able to determine what threading is needed to mate with this converter, or is this a situation where that converter can only be used with matching Schmidt sections?

Also, it appears from the picture in the catalog that the converter has a friction-slip fit onto a nipple on the section, and the thread is only to secure it so that it doesn't inadvertently come loose due to vibration. Is that a correct assumption?

The thread is a M7.5 x 0.75mm. The tap can be found on Amazon and EBay. The tip engages the nib/feed to seal the same as the others but the thread holds the converter tight against nib holder.

More4dan said:
The thread is a M7.5 x 0.75mm. The tap can be found on Amazon and EBay. The tip engages the nib/feed to seal the same as the others but the thread holds the converter tight against nib holder.
Click to expand...

Louie, I went to your website link. You are a very talented photographer! Love your work!

The issue of the various options for fountain pen ink stimulated my curiosity, so I did a little research. The following discussion summarizes my findings.

Let me start by saying that I only looked at name-brand products available from reputable on-line retailers. I know that it is possible to purchase very inexpensive ink, especially in cartridges, from vendors such as e-Bay, but I am hesitant to assume that such anonymous products are equivalent in quality to the major brands. Ultimately, ink isn't really all that expensive, so I don't think it makes sense to take unnecessary risks by shopping the obscure brands. But obviously, that's my opinion - your mileage may vary.

Also, because I didn't want to take the time to do an exhaustive survey, I know that I missed some very obvious major brands. And I only looked at selling price from one retailer - it's possible that there could be minor variations if multiple retailers were considered. And that's why I have chosen to not identify the specific manufacturers represented in the results. My objective is to arrive at generic answers rather than definitive conclusions that might be true today, but subject to change due to market volatility.

My major conclusions are summarized in two charts: 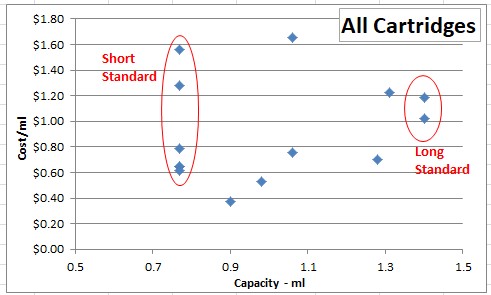 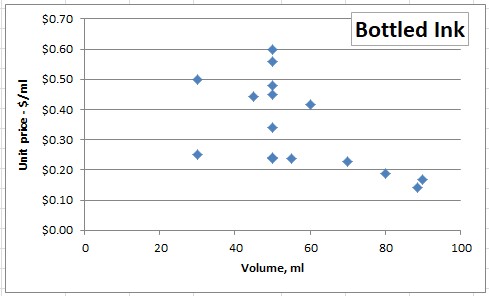 So - most ink in standard international short cartridges cost between 60 and 80 cents per ml. There are a couple of brands that are more expensive. I suspect that the main reason for that is that the manufacturers of those inks are attempting to establish a market placement as a premium product. Those inks are made by pen manufacturers who also are known for more expensive pens. Ink in standard long cartridges ranges from $1 to $1.20 per ml. There are relatively few pens that can accept the long standard cartridges, so my suspicion is that the higher price is due to lower sales volume, and perhaps also less vigorous competition since there are so few manufacturers who offer ink in that size. Incidentally, pens that can accommodate a long standard cartridge typically can also hold two short cartridges a the same time, one in use and the second in reserve.

Pricing for proprietary cartridges is all over the map, but its important to recognize that because these are proprietary, manufacturers have essentially no competition and can charge whatever the market will bear. This is not at all unlike Gillette razors - if you buy their razor, you are locked into buying their blades.

If you look at the standard international short cartridge market, where there is true competition, the least expensive options among those I looked at are Diamine, Kaweco and Monteverde (all of which are very good inks).

Bottled ink also comes in a wide range of package sizes, so again unit cost is the only viable comparison. In my survey (which is admittedly not exhaustive) the average unit cost of bottled ink was 34 cents per ml - which is less than the unit cost of any of the options for ink in cartridges. This illustrates the point that has been made in this forum many times - ink is more expensive in cartridges than it is in bottles, which is why many users opt to use refillable converters (pumps) rather than cartridges. The least expensive bottle inks are those from Noodlers, Diamine and Monteverde. One other observation that isn't obvious from the charts - the least expensive bottled inks are generally packaged in the most ordinary bottles. Or saying it differently, when you let the shape of the bottle dictate which ink you buy, you will likely pay more for the contents (which is often true of products at the supermarket).

Obviously, users have a choice between cartridges and bottles. Bottled ink is less expensive, and there is a much larger selection of colors and ink characteristics. Cartridges offer convenience and are generally less messy, and that's not an insignificant consideration for many people.

Finally, while I didn't consciously try to analyze ink prices versus characteristics, my sense is that the major factors in determining the price we pay is the way it is packaged (bottle versus cartridge) and the name of the manufacturer. If there was any pricing differentiation based on things such as shimmer, shading, water resistance and permanence, reaction to UV light, etc, I did not see it.
Last edited: Jul 29, 2020
You must log in or register to reply here.
Previous Next
Share:
Facebook Twitter Reddit Pinterest Tumblr WhatsApp Email Link
Top Bottom