In honor of my father-in-law

This is set of 15 Bereah Hardwood Blades made for my wife's family.
My father-in-law passed away several years ago. He was involved in agriculture and ranching his whole life. The pen bodies are made from fence boards recovered from the livestock pens located on his property.
Five of the pens are the gun metal/chrome hardware, these were presented to my mother-in-law, and her four children, on the occasion of her 80th birthday. The other 10 are all chrome and went to her grand children.
Sanded to 1200, then 24 coat CA finish sanded at coats 6, 12, 18 and 21. 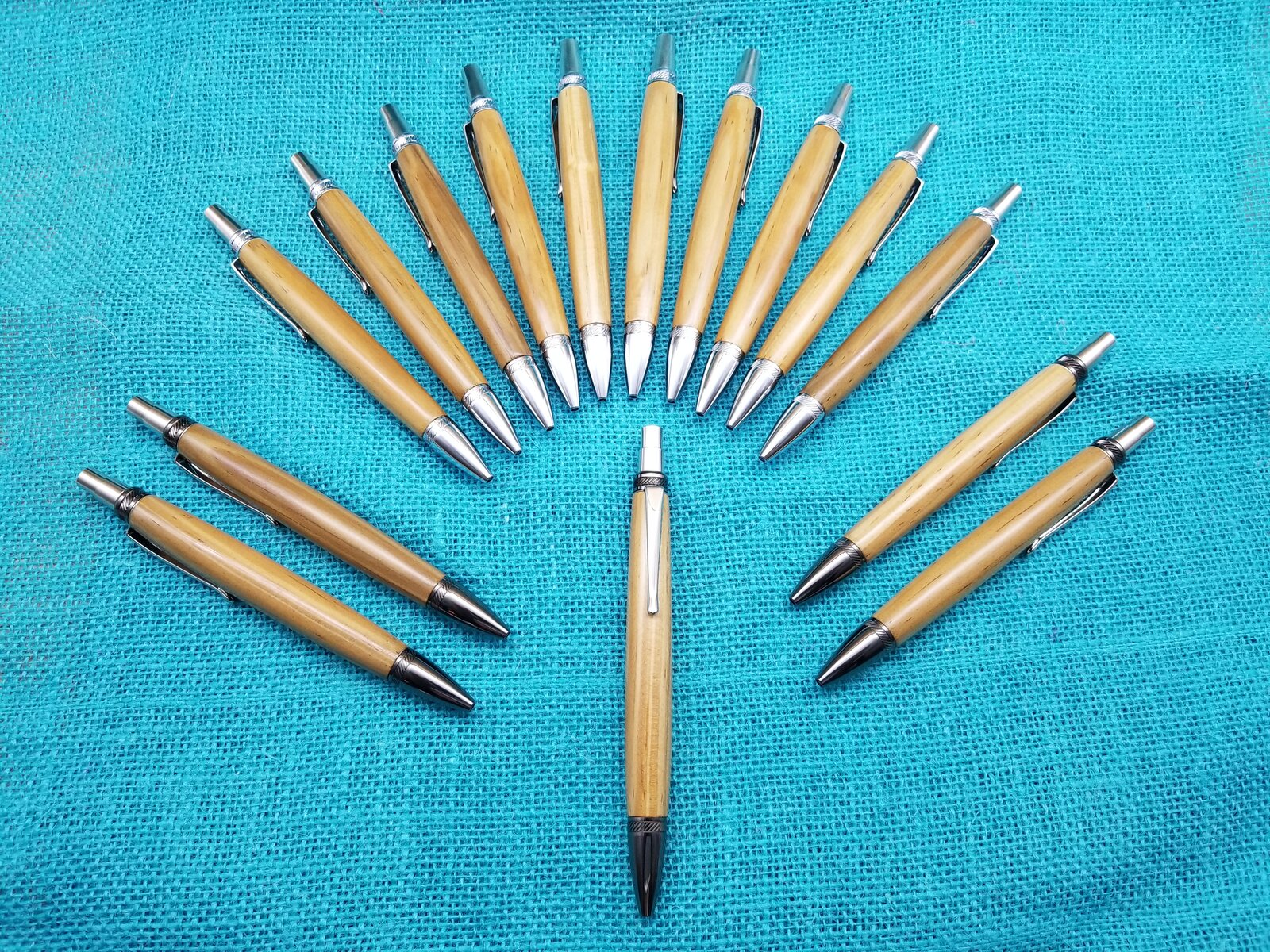 Those pens will be treasured by your in-laws, I’m sure. I really like the Blade too; maybe my favorite click.

Those are great! I enjoy the natural look of them. I don’t think they are “plain” at all!

Sweet! Some of the most prized pens are made from woods with a story - especially those with a personal connection like this. These will surely become family heirlooms. Dave
A

Good use of fence wood from the family ranch. Very nicely done.
L

Nicely done Jim, those pens will mean a lot to the family members. Each time they use them,they should think of their father and where they came from.

very nice semi matte finish. I wish I could get ca to work like that for me !

They will be treasured memories for sure

Thank you all for the comments. It really was a labor of love.
I try to learn something from every pen I turn, and this project taught me a lot. We actually went through several prototypes before deciding which pen to biild. Tried the PSI Compson and Devin, also a Woodcraft Wall Street II Elegant before deciding to use the Blade. Seemed to give the best combination of a smooth mechanism, good feel in the hand, and a long body to show off the wood, which is what we wanted to sowcase.
Up until now, all the pens I've done were pretty much one-offs. Making that many alike, trying to get the same profile and size wasn't easy. They aren't "identical", but close enough for the casual observer. It did give me plenty of opportunity to work on a technique for CA finishing that seems to work pretty well for me. Something I've struggled with but getting more comfortable. Still needs some work.
I was afraid drilling the blanks was going to be an issue, since they are pretty long. Just before starting I was able to score an older, cast iron, Craftsman drill press with a 4" stroke. Lightly used, almost new condition. Worked great. I know a lot of you drill on your lathes but, the tail stock on mine doesn't have enough travel for these longer pens.
Can also say that processing the blanks in batches, one step at a time really made a difference.
The information I've been able to glean from IAP has been invaluable.
Thank you again.
You must log in or register to reply here.
Previous Next
Share:
Facebook Twitter Reddit Pinterest Tumblr WhatsApp Email Share Link
Top Bottom