I have always held pens and pencils a little bit higher up the barrel. This goes back to an art teacher I had at school who had the most beautiful hand writing I’ve ever seen, and he was a high gripper. I remember thinking that if I also held a pen like that then my own cursive would naturally develop like his. Unfortunately it didn’t.
My grip does mean I’m not a big fan of steps on fountain pens as they tend to always get in my way. I do sometimes make these types of pens, and for most people they aren’t an issue. It’s just not for me. Most of the pens I make don’t have steps but one consequence is they are obviously slimmer than pens that do step up in width.
So I wanted to make a pen that was step-less but had a bit of meat around the belly and came up with this. It tapers out immediately from the threads towards the centre and then back inwards towards the end, where the cap posts. The curve itself is formed from the arc of a perfect circle. The section is also tapered, rather than pinched, to follow the lines of the pen. The final picture shows the square and round ended versions. 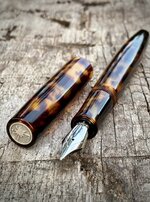 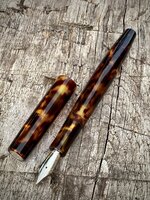 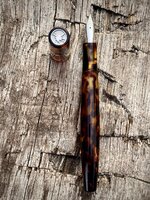 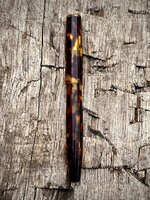 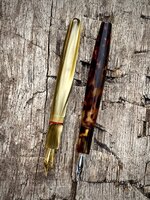 Great looking pen Ash.
Since you grip high on the pen have you considered threading the very front of the section and at the end of the cap. That would let you grip everything above the first 3/8" or so of the section

Curly said:
Great looking pen Ash.
Since you grip high on the pen have you considered threading the very front of the section and at the end of the cap. That would let you grip everything above the first 3/8" or so of the section

Thanks Pete, and yes I have been playing around with this idea. I decided to shelve it until I can develop a pen with a fixed section which, in turn, means designing a different type of filling mechanism. (I use converters currently).
I’m also looking at custom threading for the cap, and in my head all things will happen together. We will see...