Help me decide what to do with this

Besides send it to you.
It’s a piece of splayed maple about 9x10x1/2. I don’t want to cut it into pen blanks as they would only be about 1/2” square.
Don’t want to make a clock out of it as I don’t want to get into the clock business. 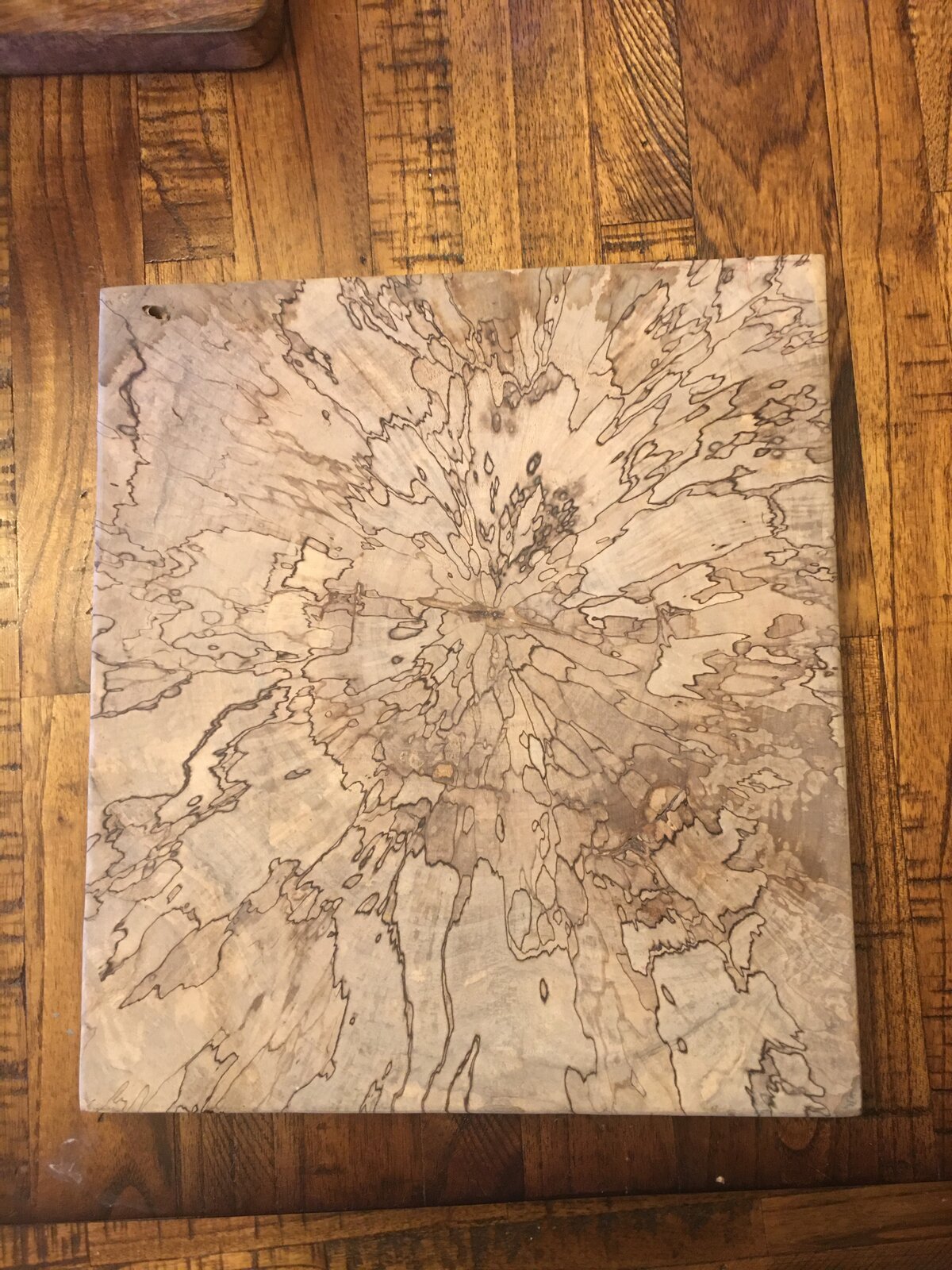 My thoughts were to put a poly finish on it and a picture hook on one side and sell it as a “natural picture”. LOML suggested selling it as a decorative trivia.
Anyone have any other suggestions?
Last edited: Sep 19, 2021
Signed-In Members Don't See This Ad

If you had a Ring Master, it would make a beautiful bowl from a board. I love spalted maple!

Dont cut it! Let the piece speak to you. To me, it screams clock. It would be great to center the mechanism on the pattern. Do it.

You took out my suggestion because my thought would be a clock.
1

Natural picture for sure . Anything added other than finish will detract from the appearance . Sell it as your wife says , and not cheaply .

1080Wayne said:
Natural picture for sure . Anything added other than finish will detract from the appearance . Sell it as your wife says , and not cheaply .
Click to expand...

That’s the direction I’m heading. Thinking of pricing it about $50. Too high or too low?

As Tomas said, a Ringmaster would make that an awesome bowl. If you want to keep it as a bowl, send it to me and I can git'er done. We can discuss the details by PM.

Natural Picture! While a clock would be nice, this is a beautiful image and without the clock's mechanisms/materials I believe the image will be overlooked. A Natural Picture will allow the spalting to be the highlight, not the time of day. JMO.
L

Try to sell it as a wall decoration (it's not a picture). If no one buys it you still have other options, including hanging it on of your wall. A clock is an obvious option and I think it would sell quickly. If that's really out of the question you could think about casting pieces of it or using it for other segmenting projects. It's a beautiful piece with lots of possibilities.
R

Jewellery box lid with the box part made from contrasting very dark timber, hidden hinges and no detracting hardware.

I was going to suggest slicing into strips, doing a glue up to make a pepper mill... would be an awesome looking mill, but alas, it's too thing to do that.... I like your idea of just doing a finish and putting a hanger on the back as a piece of art... awesome piece of wood.

It would make a wonderful lid for a wooden bowl.

It's a ready made cutting board. JUST KIDDING!
That's amazing exactly as it is and I would personally hate to destroy that look. You can't outdo mother nature's artistic abilities. It should be preserved and put where people will see it. The lid suggestions sound good, but anywhere it can be a focal point, even as a natural picture on the wall, would be perfect.

Make a trivet out of it.

If you are going to make it a picture thing than give it a frame of dark wood and this will highlight the interior wood. Make the center stand proud of the frame. It is a nice piece of timber for sure.

If you are a woodworker, the suggestion of a jewelry box or memento box is a good one. You have the focal point.
1

Monty said:
That’s the direction I’m heading. Thinking of pricing it about $50. Too high or too low?
Click to expand...

I would be thinking of 3 digits , starting with 1 , ending with 0 , but don`t know what 2nd digit I would use . A likely customer would be a lady in her 40s who entertains a lot, and is looking for a conversational focal point with a good story attached . You can easily provide the story by explaining spalting , and perhaps showing other examples so she appreciates how unique that one is .

John`s suggestion of a dark frame is a good one .

I would go for the wall/Table art. If a frame as JT suggests of a dark wood, I would make it no wider than 1/8” and have a beaded edge. I like the idea of the frame sitting back and letting the piece stand proud. Also, if wall art, perhaps mount on the diagonal at add to its ability to draw the eye to it.
I would prefer a flat/satin oil looking finish rather than a gloss or top coat finish.
good luck!

I would turn it into the top for a pen box.

It is pretty wood. But I think that as an art piece, it would not have a lot of value. Art pieces need to be both impactfull - to capture the viewers initial attention - and lasting so that the view won't get tired of looking at it. I'm afraid that this would soon get old as a standalone wall hanging. And unfortunately, that would affect its value.

So I like the idea of box tops - you have enough to make several, and a top made from that material could increase the value of each box considerably, ultimately resulting in bringing in more than what a single art piece might bring. As because boxes have utility as well as visual interest, purchasers would appreciate them longer.

And if its 1/2" thick, it would even be possible to use it as material for inlays rather than the entire box top - that would double the number of boxes that could be created, and potentially further increase the revenue.

I like the diagonal look also. Makes it look like a diamond which it is in the wood timber arena. An oil stain to make it pop and as mentioned a satin finish of lacquer. It can be cut in half or even thirds for inlay work such a box tops.

I remember a few years back a local here in TP had a pecan board about 4' x 12" that had spalting very similar to your Maple piece.... I tried to buy it from him, but he wasn't in the market to sell... don't know what he ultimately did with it, but he was quite the artist with knives, leather and such... not a wood turner. He's passed on now, but was a very interesting man to talk to.

Thanks for all your suggestions.
Think I’ll go with it as is with a dark frame. I’ll post pictures when I get it done.
P

Maybe add a dark outer frame then add finger groves and use as a writing slope lid? Or I-pad stand by adding a slat at one end then oil finish and a couple,of buttons underneath so it stands at a slant?
G

I made a jigsaw puzzle from a piece of spalted wood that was quite a challenge to assemble as it had two sides to look at and each was a bit different. It had a natural edge to on side that made it a bit easier to deal with.

How thick it it? If you can cut four slices out of it and set them on a plywood backing,, maybe with a line of red padauk or something like that between the four squares, it would look pretty striking as a wall hanging.