I'm having trouble getting the CA to adhere on a pen i'm turning. What's happening is that after application the CA is detaching from the edge of the blank post turning and finishing, causing semi transparent white clouding in parts right at the edges of the finished section/ cap. I used denatured alcohol to clean and de-grease and allowed the blank to dry fully. I'm wondering if i'm getting too smooth a finish with my turning (as you know Olive turns super smooth) and that's causing the CA to detach from the Olive Wood without sinking into the wood. Incidentally I used a first coat of Superthin CA so that it would penetrate the surface easier.
Others must have had the same problem and I'm wondering what the solution might be.
Any help and suggestions appreciated.
Signed-In Members Don't See This Ad

clean the blank repeatedly with acetone before finishing. this is to remove excess oil from it

If the blank is quite dry, CA will adhere without much problem; however, if it is still fairly oily, you will need to spend extra time trying to get it dry enough for a good CA finish as Phil suggested.

I sometimes use a CA finish on olive wood, but generally just on very dry blanks. If the blanks are still somewhat oily, I usually just finish with a friction polish.

I would suggest after turning close to final size, that you place the pens to the side to dry out more, the olive wood holds a lot of moisture even after sitting out for quite a while. Then turn to size later. The oil nature does tend to cause problems with CA but the suggestion of Acetone is an interesting idea.

I personally use Renaissance Wax to satin finish Olive wood, i know it doesn't last as long, but on sierra kits, the owner wont be holding on to the wood itself

1. Denatured Alcohol (like you've done)
2. Start with thin CA (I do two coats)
3. Then do coats of thick CA

You shouldn't have a problem with it being to smooth, I micromesh all of the wood I turn before I apply CA and have never had a problem.

Thank you all, I've never ever had this problem with any other wood and so a trend is emerging from your replies that it is most likely the oil in the wood causing the problem. I shall try again taking all suggestions on board.

I've had this problem on other woods before - even very dry non-oily woods. I believe it is the thick CA causing the problem. When I use only thin CA (10-15 coats), I get much better results. I could be wrong though.

This is the problem that drove me to using TBC or turning between centers. The breaking away of the bushings, even when scoring the CA to the edge of the bushing to pull the bushing out would cause lifting.

Of course I used acetone to try and eliminate oilyness and increase adhesion, but that was inconsistent at best.

I have never had a problem with lifting/separating of the CA since I started turning between centers. Below is a picture of a drive center that I made from a short aluminum rod. At that time, there were only two fellows that had tried or knew of TBC or even spoke of TBC on IAP. Also, they used several terms to describe it including "mandrelless" and "without a mandrel". 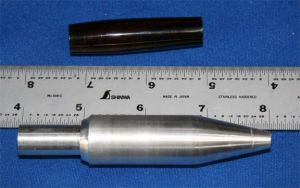 Some history here:
By the way, that ebony pen blank in the background is the one in which CA lifted on three different tries and drove me to start using TBC, which basically started the move to TBC on IAP. Frank "Rifleman" and John Goodin "Johnnycnc" both mentioned in a post that they knew of a pen turner (not on IAP) who turned pens without mandrels. That in itself eliminating that lifting on the ends, as well as other problems. Frank had mentioned this several months prior to my trying it. So, after mulling it over and problems 3 times on the ebony wood pen, I turned the drive center, which was retired after getting one from the Little Machine Shop.