Made these over the last 3 days. Four Rinehart rollerballs from Berea
Top and bottom use carbon fiber blanks that I bought from Exotics
Second from top is made with feather blanks from Marla via Classic Nib (Reeves pheasant)
Second from bottom has Bocote blanks with no finish

I like the hexagonal style of the Rinehart, but things get a bit tricky during assembly trying to align the surfaces of the hexagonal themed components with each other (and with the blank pattern in the case of the feathers)

I make things easier to align by reaming out the brass tube ends so that the components fit a little loosely and can be turned, and then I glue the parts in one by one using 5 minute epoxy

Apart from that, the Rinehart is an easy pen for beginners because the design naturally favors straight-sided blanks. 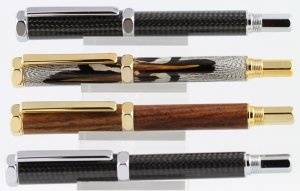 Nice looking group of pens you have there!!

Very nice looking pens! I also like the hexagonal accents.