Well, I finally got it done! I'm not entirely pleased with it, but for a first try, it wasn't bad. I gave it to my mother today for Mother's Day (belated), and she was very happy. She has a stingray skin purse, so this matches the purse. When I talked to her in passing a few months ago about pens, she basically said she wanted a slimline, but the skin is thicker than the kits allow on a slimline, so I had to go with something a little bigger. Even with this kit, the skin is a little too thick. Next time, I'll sand down some of the "leather" on the back of the skin to thin it out, and be more selective about what parts of the skin I use on the different halves (different sections of the skin have bumps with different thicknesses).

I wound up using a paper cutter to cut the skin, because nothing else I had did an accurate enough job. Even with the paper cutter, it still came out funky, though it was certainly closer than a razor or scissors. I glued the skin to the barrel using black CA, and wrapped the skin around on an angle in an attempt to hide the seam a bit. The top came out OK, and that was the first part I did. The seam meshed nicely, with only a few minor gaps in there here and there. But wen I went to do the bottom, it just gave me all sorts of problems. It wouldn't line up properly, there were a lot of gaps, and I wound up having to use the black CA to try to fill some of them.

I think next time, what I'll do is cut the skin with the paper cutter, but then square it up using my "disk sander" (6" faceplate with some sand paper). That's how I squared the skin to the tube, and it worked really well, because it sanded through the larger "bumps", rather than trying to cut them. Another option was to use a Dremel with a cutting disc, but I'm ot sure how well that would work (may not be accurate enough).

Any way, comments, critiques (other than re-take the "open" picture; I don't have the pen any more!), and (most especially) suggestions on how to improve it are appreciated! 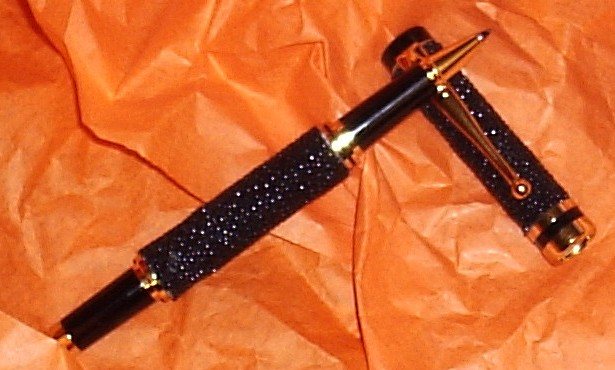 Looks good to me. also looks like a hard material to get all matched up. I've never seen stingray skin before.
D

Where do you find a stingray willing to part with it's skin? Not to mention someone who knows how to tan the skin so it it usable? In other words where does one get stingray skin?
J

You plow new ground and someone is already copying you:

Jim did a great job on this pen. The texture is out of this world, and it is even better in person..

Thanks for the great comments, guys! [:I]

Mac, the skin came from eBay. Tanned fish skins are becoming very popular; check out http://www.oceanleather.com for some really cool stuff people are doing with them. That's where my mom's purse/handbag/whatever you call it came from. I think I paid about $20 with shipping for a small skin. I had enough material there to make this pen, and probably two or three more, and still have enough left over to make a decent size pen rest that will be encased in the skin (on my to-do list).
J

Jim very nice pen I'm sure your mum is happy.

Thanks Serge and Jack! Yeah, she was thrilled! I'm glad she was so happy. Now I just need to perfect my technique!

After seeing the pen on e-bay for only $1500ish, your mom should sure be impressed!

Yours (sorry, hers) looks just as good!!!

Thats a superb pen Jim, I am still at the "try to master wood" stage! LOL[^]
J

Mark, have you SEEN my other pens? I'm still at the "try to master wood" stage too! In some ways, this was easier than the wood pens, and in some ways, it was a royal pain in the rear!

Ed, thanks for the compliment!
K

Beautiful Jim. I have to put some of that on my to buy list.
Still think you ought to re-take the "open" picture![}][]
ken