This is my first time trying to put a 3D texture on the pen body using a laser. The is an all wood rollerball pen made of ebony. 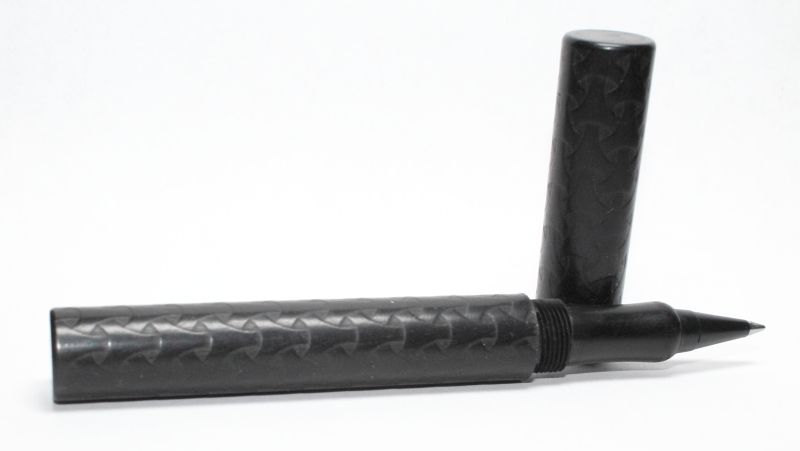 So ... how is this done? Several years ago when I got the 60watt Epilog Helix, I noticed on the advanced page in the printer setting there was a function called 3D. I tried it out at that time and kind of dismissed it as a novelty, not very practical. Recently I revisited it to see what I could do with it. After many test blanks I was beginning to get a handle on how the process worked and thought it may be a viable way to texture a pen. I'm certainly not a laser expert but will give my take on how the process works.

When you are engraving photos and such using the standard raster method the laser basically functions similarly to a black and white laser printer. There are two functions that it does, either fires the laser or not fire the laser on a pixel. The power of the firing can be adjusted between 0 and 100% but stays at that power level. On white elements the laser doesn't fire and black elements it does. Shades of gray are done by the spacing(dithering) of the black dots. On darker colors the spacing is tighter and lighter colors it is more sparse.

When you use the raster 3d mode you need first to have an image that is designed to use it. It is a depth mapped bitmap image where the height is a function of the shade of the dot. Totally white dots are the highest in the texture and on these dots the laser doesn't fire. The totally black dots are the lowest point in the texture and the laser fires at 100% power on them. On the gray dots the power that the laser fires is proportional somewhere between 0 and 100% based upon the percentage of black that is in the gray. So in a nutshell what happens is that the laser moves across the media constantly changing its power output to accommodate the darkest of the pixel being engraved.

Here is a low angle photo to give you a feel for the depth of the texture. 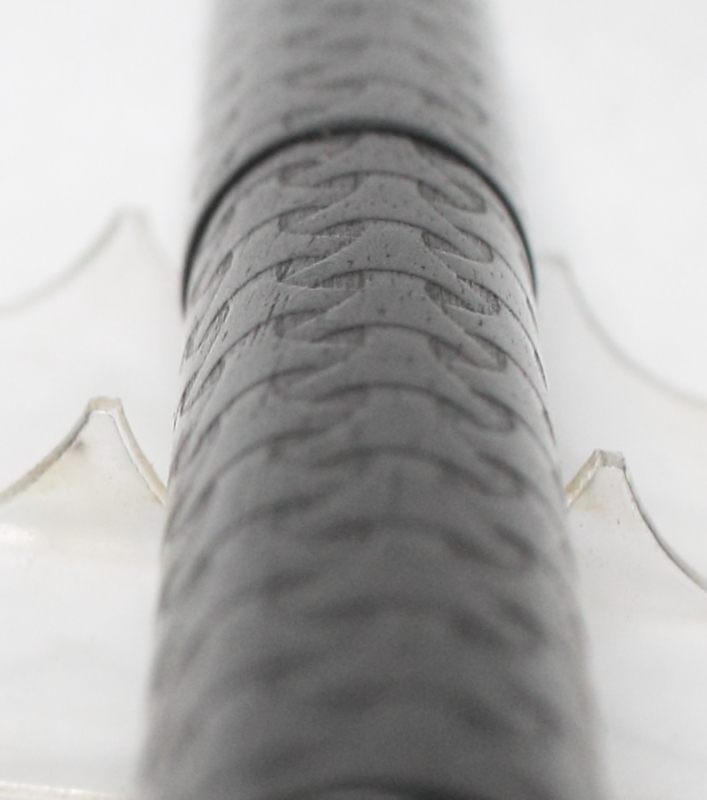 Here is the depth mapped bitmap that was used to burn the texture. 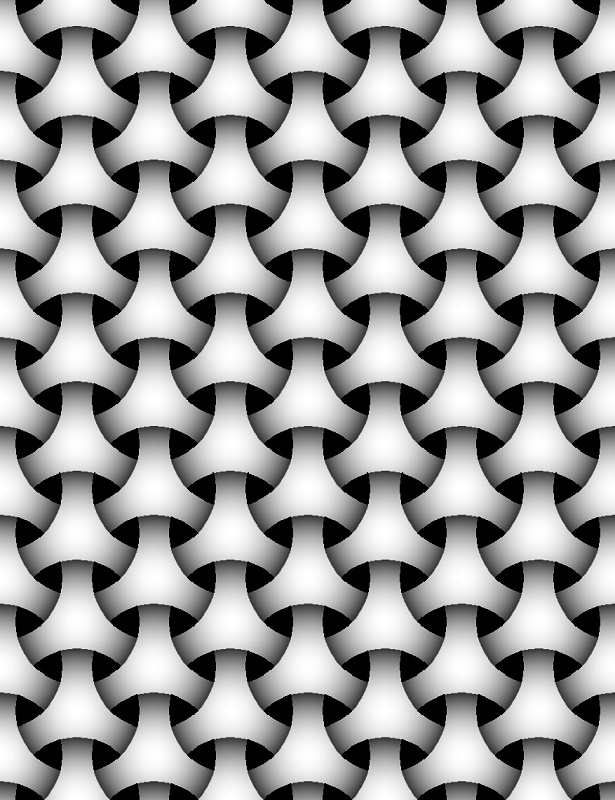 Here is what I have learned about this process at least from an Epilog Laser perspective. Your mileage may vary if you have another brand of laser and want to try this.

The power settings in the 3D mode are set to absolute values. The sliders on the power for raster engraving has absolutely no affect on the 3D raster engraving output power. Even if you set it to zero it still fires at 100% laser power on a totally black dot. The only way that you can adjust the depth of the engraving is to adjust the darkness of the depth mapped bitmap. In Corel photopaint there's an adjustment called Color Tone. It has a slider on the left to adjust the lower limits of black (on a scale of 0 to 255 if you move it to around 127 then the blackest black in image will be 50% black). If I recall this texture was burned at 30% black for maximum darkness.
Last edited: Sep 30, 2021
Signed-In Members Don't See This Ad
S

Ken I've got an epilog zing, and after reading this I've realized I have even more to learn than I thought! Nice work!

Nice pen Ken. Thanks for the great explanation. Even I understood some of it.

You are in a class by yourself!

Lovely pen. It is reminiscent of the early black rubber Shaeffers.

That is FUN. Thanks for sharing and for the great explanation!

Expanding the skill set in pen making - Excellent! Thanks!

showcaser said:
Ken I've got an epilog zing, and after reading this I've realized I have even more to learn than I thought! Nice work!
Click to expand...

Thank you, Patrick! There is a lot to learn to utilize the machine to its fullest potential.

Dalecamino said:
Nice pen Ken. Thanks for the great explanation. Even I understood some of it.
Click to expand...

TonyL said:
You are in a class by yourself!
Click to expand...

Thank you, Tony! I'm not sure about the class thing but I do remember being in D-Hall by myself one time in Junior High School!

Bryguy said:
Lovely pen. It is reminiscent of the early black rubber Shaeffers.
Click to expand...

Thank you, Bryan! I'm not familiar with those pens! I'll have to google that and see if I can find some photos.

Wmcullen said:
That is FUN. Thanks for sharing and for the great explanation!
Click to expand...

Ken Wines said:
Thank you, Tony! I'm not sure about the class thing but I do remember being in D-Hall by myself one time in Junior High School!
Click to expand...

That is funny. I always earned good grades so my teacher (nuns, brothers, and priests) tolerated my joking. They would throw me out the class, but allow me to walk the halls. Funny memories. I would love to watch you make those pens.
You must log in or register to reply here.
Previous Next
Share:
Facebook Twitter Reddit Pinterest Tumblr WhatsApp Email Share Link
Top Bottom