So, I decided to try dyeing some curly maple. Not so curly maple IMO. I don't know what I was expecting...I think I was expecting something more interesting. I originally used a combination of liquid Rit dye with alcohol (1 part dye, 6 parts alcohol), but it was very pale. So I switched to full strength. I was experimenting, so I didn't care.

I assume that the difference in consistency (dark spots vs. no spots at all) are due to the wood itself.

After I assembled the pen, I think it looks OK, but I discovered that at the bottom of the blank I turned it too much and it is actually less in diameter than the nib, which is the first time i ever did that! Usually I make them too large. Someone might like it, maybe even wouldn't notice it, or know that it should be exact, but I'd never try to sell it like that. In fact, I think I will be disassembling this pen. 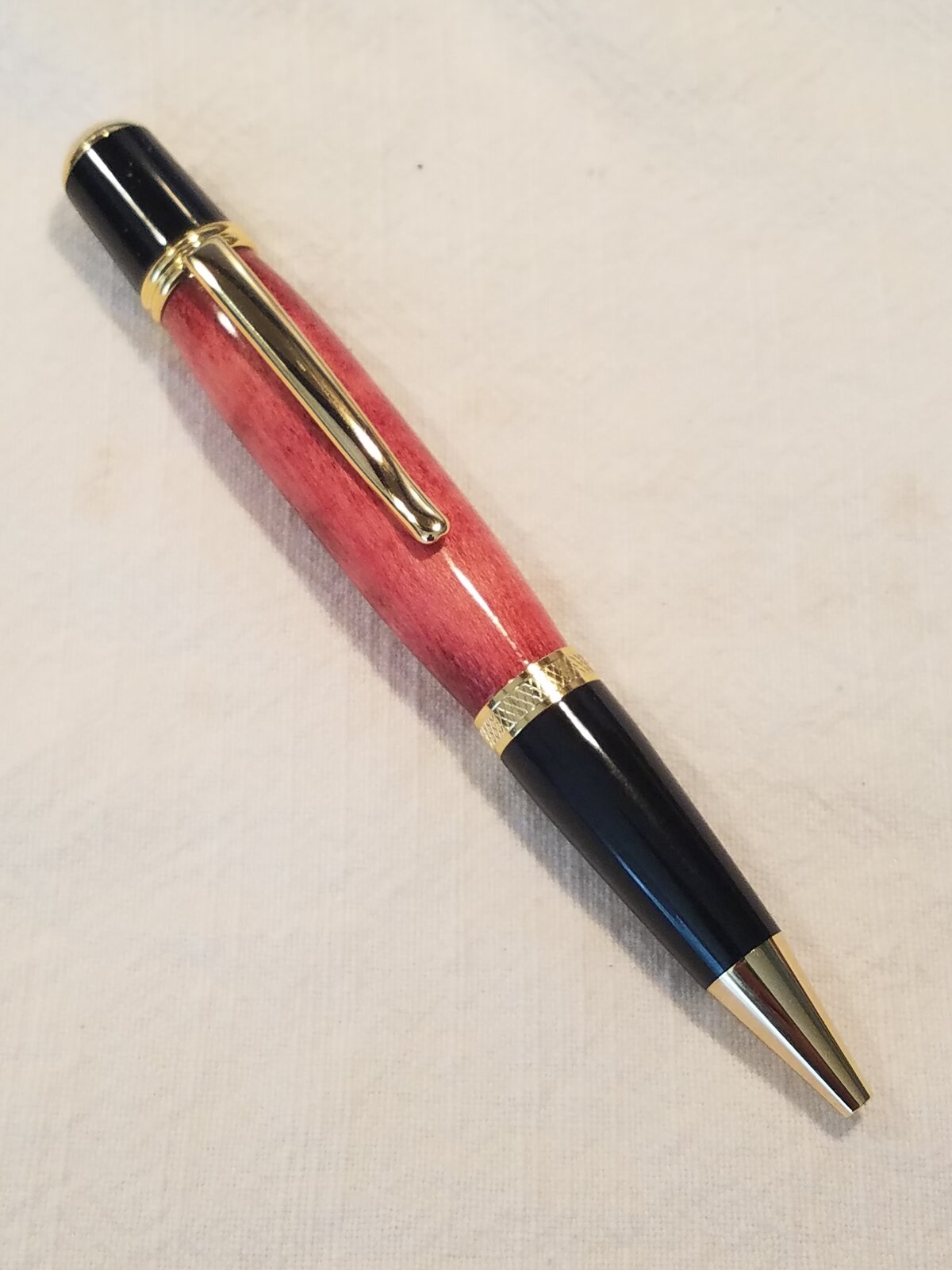 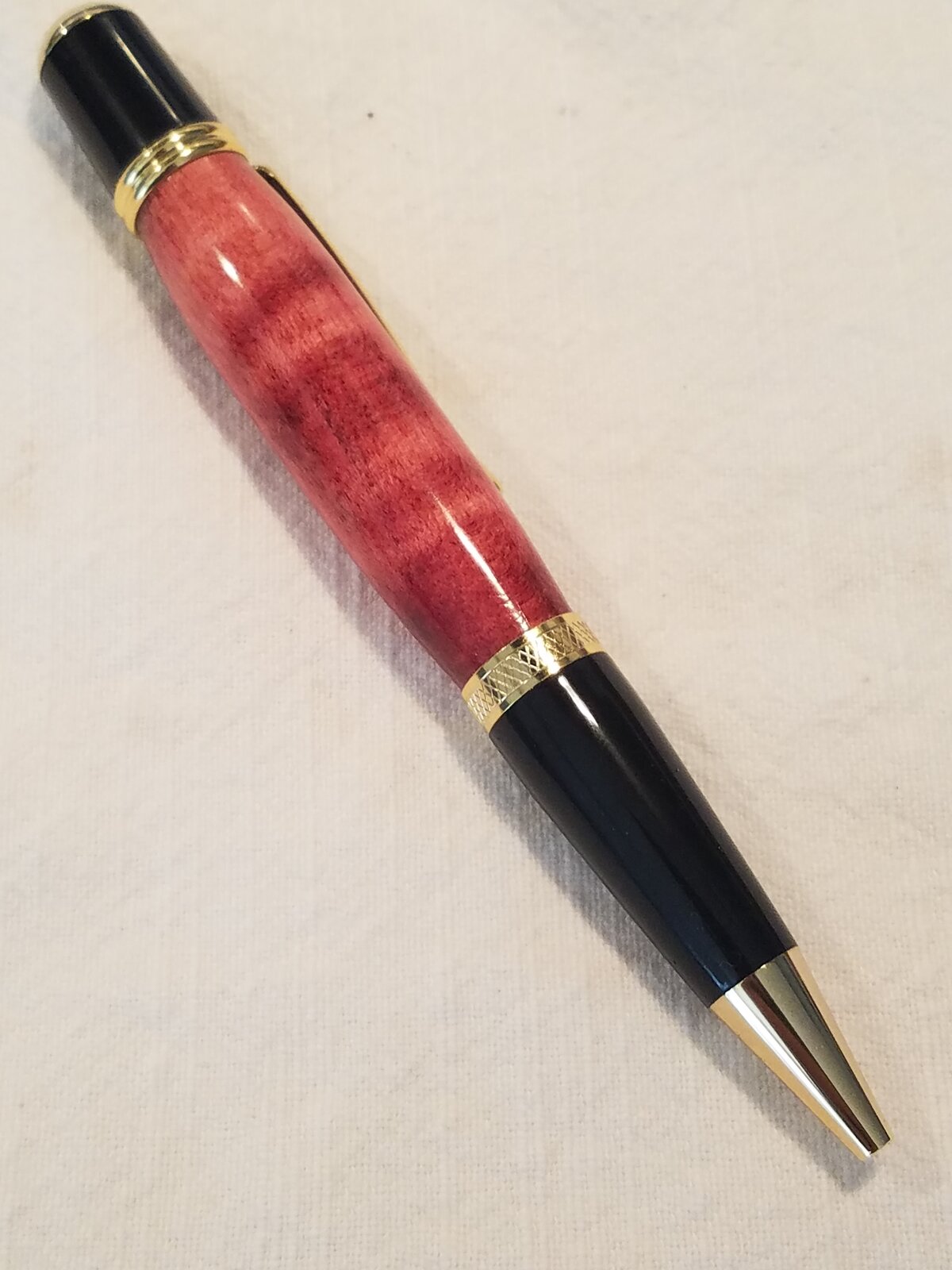 Looks like the bushings were worn--you probably want to measure to confirm, but if worn, mark them so you don't make another pen with the same problem!!!

I agree on the bushings. In fact, I was going to mention it in my post but forgot. Thanks for reminding me!

Decided I like this a whole lot more! What is causing this? The maple itself? The wood fibers catching the light differently? Its not the CA, is it?

If you can't tell from the video I uploaded, the color of the red banding appears to change as you orient the pen differently. Surprised I didn't notice this until now.

I'll have to try it again...and turn it to the correct size this time.

What you're seeing there is a bit of chattoyance ... some woods have it ... try typing that ... gives your spell-checker fits !!!

chattoyance...OK. So now I have to look that up.

Chatoyancy is considered by many - including this guy - to be an attractive and coveted quality. Looks good!
J

So, and UPDATE on the bushings!

A few days ago, I checked the blanks. They were both the same size, which I thought was odd, because one end of the blank seemed to be too small...or, smaller than the knurled band on the nib assembly. I tossed them back in my "Wood River Wall Street II" box and made a mental note to buy some new ones.

So, yesterday, I had an old blank of very boring walnut that I decided to bleach. It came out almost totally white...even more boring. So, I dyed it...it came out rather nice. And finished it up, just to practice, since I need to practice, since I've only been making pens a little over a month now.

But, I had another Wall Street II, fully assembled, (with boring walnut in its natural color) laying on my desk, and for some reason, decided to try the blank that was dyed maple, the one that I thought was too small from the other pen, and it fit this pen perfectly! Then I went to my work bench, whipped out my trusty vernier caliper, and it turns out that the knurl is 2 mm LARGER in diameter (OD).

Mystery solved. It's not the bushings. Its not me. It's the lousy kit!

Now I wonder if I want to go through the hassle of demanding a new kit over the $7.95 it costs for the bad one.

Overall though, I'm glad I discovered this, because it was puzzling me, and also, at least in this situation, I was not the one to eff up.

Thanks fir tissing this up. Have the setup, have not ventured into using her yet.

Seeing what others are experiencing/achieving encourages me
You must log in or register to reply here.
Previous Next

Not bad for an experiment