Eighteen years ago, wife and I built a new home. The kitchen was designed with a built-in oven, microwave and cooktop. The microwave died in 2014. We opted to order a replacement microwave and matching trim kit from Home Despot's web site which also offered an installation option. We chose to have them install the microwave. However, after it arrived we learned that Home Despot doesn't install microwaves even through their web site offered an installation option. Bottom line - Home Despot refunded the money they charged us for installation, and wife and I did it ourselves. It wasn't hard, but we were determined to not repeat that experience.

So the 2014 replacement died in June, and I called a nearby full-service appliance store to order a replacement. The salesman insisted that we did not need a trim kit because, he said, the new microwave would fit into the kit installed in 2014. But when his guys arrived to do the installation, they found that he was wrong and we needed a new trim kit. It took a full week to get the salesman's attention. When we finally talked, he insisted that the standard trim kit offered by the microwave manufacturer would not work, and instead we had to order a trim kit from a custom fabricator. Yesterday, his guys were back to complete the installation with that kit - - - and it wouldn't work. The problem is that in the original installation, and also the 2014 replacement, the microwave was supported by a couple of wooden rails that run from front to back inside the cabinet. The spacing of those rails is too narrow to match the the base of custom trim kit. The custom trim kit was apparently designed assuming that it would be supported on a solid shelf rather than rails.

The installers said that they are not allowed to modify the cabinet, so they can't move the existing rails. I'm waiting to hear from the salesman about how they plan to proceed (once again, he's not available to address the problem), but I suspect that the resolution is that I will have to modify the cabinet to accommodate the installation. I can move the rails - but only if they tell me the spacing between the bearing points on the trim kit; alternatively, I could put a solid shelf in so that the dimensions of the support points on the trim kit/microwave are irrelevant - but I'm hesitant to do that because it could interfere with air flow inside the cabinet. But most importantly, nothing can be done until I hear back from the salesman - and he's not available. I did talk to the store owner, and he promised to get some details and call back this morning. Meanwhile, we continue to wait.

And another piece of the puzzle - wife doesn't like the custom trim kit. Iit's four pieces of painted aluminum that fit together at the corners, and she is concerned that those joints will collect dust and dirt. The standard kit offered by the microwave manufacture is a solid piece of molded plastic.

So the installers have been here twice, and will need to come back at least one more time to complete the installation. It doesn't need to be this difficult! If you can't take the time to do the job right the first time, you will have to find the time to do it over.
Last edited: Jul 24, 2020
Signed-In Members Don't See This Ad
T

On top of all the cabinet problem you are still without a microwave to use. Ours died last Friday , waiting for the replacement made me aware of how much we use the darn thing, and not having one was a real pain.. New one came yesterday , it is a counter top model so no install problem but I hope you gets yours working, good luck.

Sadly nothing is built to last anymore. A kitchen remodel is in my future plans and your threads has made a mental note on me to stick with a counter top placement. Good luck, and I hope you and they work it out without too much hassle. I often point out to people I’m waiting on for return phone calls that I’m not hard to reach... just ask the telemarketers and scammers. They reach me all the time.
L

Wow Louie, are you ever getting the run-around on this, and people wonder why other's have high blood pressure.

Had a new microwave, range and dishwasher installed last summer, We went through Lowes. It was a horrible experience that took close to 4 months , from beginning to end and we still have a dented range.

Greetings from Nebraska - Built in appliances can be such a pain! The first of ours to go was the cooktop. Of course there is nothing on the market today with dimensions that would fit the opening in our countertop - everything was too narrow on one dimension and too wide on the other. Short of replacing all of the countertops, I got the one that was closest, then had to enlarge the hole in one direction and fill in the gap in the other. I wound up using a course of bull nosed tiles that go around the border. I'm sure when the cooktop fails again I will probably have to do a full kitchen remodel. It's made me a big fan of stand alone appliances.

The Best of Luck getting the job finished.
Regards - Dave
E

I installed a new microwave in 2008 when we moved into our current home. It is installed over the stove and hangs off of a metal plate which is mounted to the wall. I installed it myself before I did the installation I drilled the four holes in the cabinet bottom that it would be mounted under and placed a piece of 1/2 inch plywood on the wall which was screwed to the the studs this removed any concern about the mounting bracket not lining up with the studs in the wall. Since that one that we have is also a exhaust fan there is no need for any trim piece.

Well, the salesman called - - - I think talking to the owner helped because the salesman was falling all over himself trying to resolve the problem.

Bottom line, the store will order the manufacturer's standard trim kit. After their crew completes the installation, they will take back whichever kit they don't actually use.

Modifying the cabinet is my problem, but that's understandable. The existing support rails are 1/4" plywood, and my plan is to replace those with a plywood shelf that attaches to cleats at the front and back of the cabinet. However, I am not planning to have it extend all the wall to the side walls - leave some space for air flow. Also, since I'm a 'belt and suspenders' type guy, I plan to include additional cleats on the edges of the plywood, running from the front to the back of the cabinet, to prevent sagging.

To John's point, I've been told that the 'normal' life expectancy of microwave ovens is around seven years, and the most common failure mode involves the microswitches that keep the electronics from operating when the door is open, but the cost of repairing/replacing those really cheap switches is typically more than the cost of replacing the entire microwave. And that's part of the frustration - our refrigerator is approaching 25 years old (yeah, borrowed time), and wife and I have been doing some proactive shopping to get a feel for what our options are. The appliance dealer we bought the microwave from was at the top of the list of potential refrigerator dealers - but they probably have lost their place in the ranking at this point.

Ken - when the first microwave failed in 2014, we started looking for a replacement at Lowes. The problem was that their sales people were totally clueless about what they had to offer; they couldn't even operate their computer system to consult their catalog. That's been my general experience at Lowes - if you can't find it in the store yourself, don't expect to find it at all. I have issues with Home Despot, but at least the old guys in the orange aprons usually know where stuff is, and because they've been around the block a few times, they also generally are pretty good sources of advice on how to get something done.

When we purchased the Dr Nelson Wilson House in January, we had already ordered new appliances from Home Depot to arrive during the move in period. The day of delivery we were told not everything arrived and they had to delay 2 weeks. When the delivery truck showed up, they unloaded washer, dryer, stove, dishwasher and second ice maker kit for fridge but no refrigerator. They then indicated they had forgotten it but would not deliver until their next run to our town in a week. We refused to accept/sign the delivery ticket since everything on the ticket was not delivered. Delivery guys manger told them to go back in the house and load up the other appliances. I told them if they set foot in the house I would call the cops. Manager said that was fine, but I explained to the poor guys who did the delivery that I had a paid receipt for the appliances in my house and no cop would allow them to be removed.

M wife was working the phone with Home Depot who said they could do nothing because delivery was contracted out. The delivery company said they could do nothing because their hands were tied by Home Depot. After a 2 hour stand off (Delivery guys are paid by the delivery from the contractor) Home Depot said they would send us a check for our in concierge if we went and got the fridge ourselves, right then. Headed 1hr away, loaded up a 720lb refrigerator, drove back, unloaded the next morning. Home Depot sent a check for $50.

Oh, and the original 2 week delay was because the ice bin for the 2nd ice maker had not arrived. Everything else was sitting at the shipping location the entire time.

When I remodeled our kitchen I went with this option, an open cabinet that will hold the microwave. Have replaced it once already, just plug it in and you're all set. If you can do without the cabinet it's a good option. 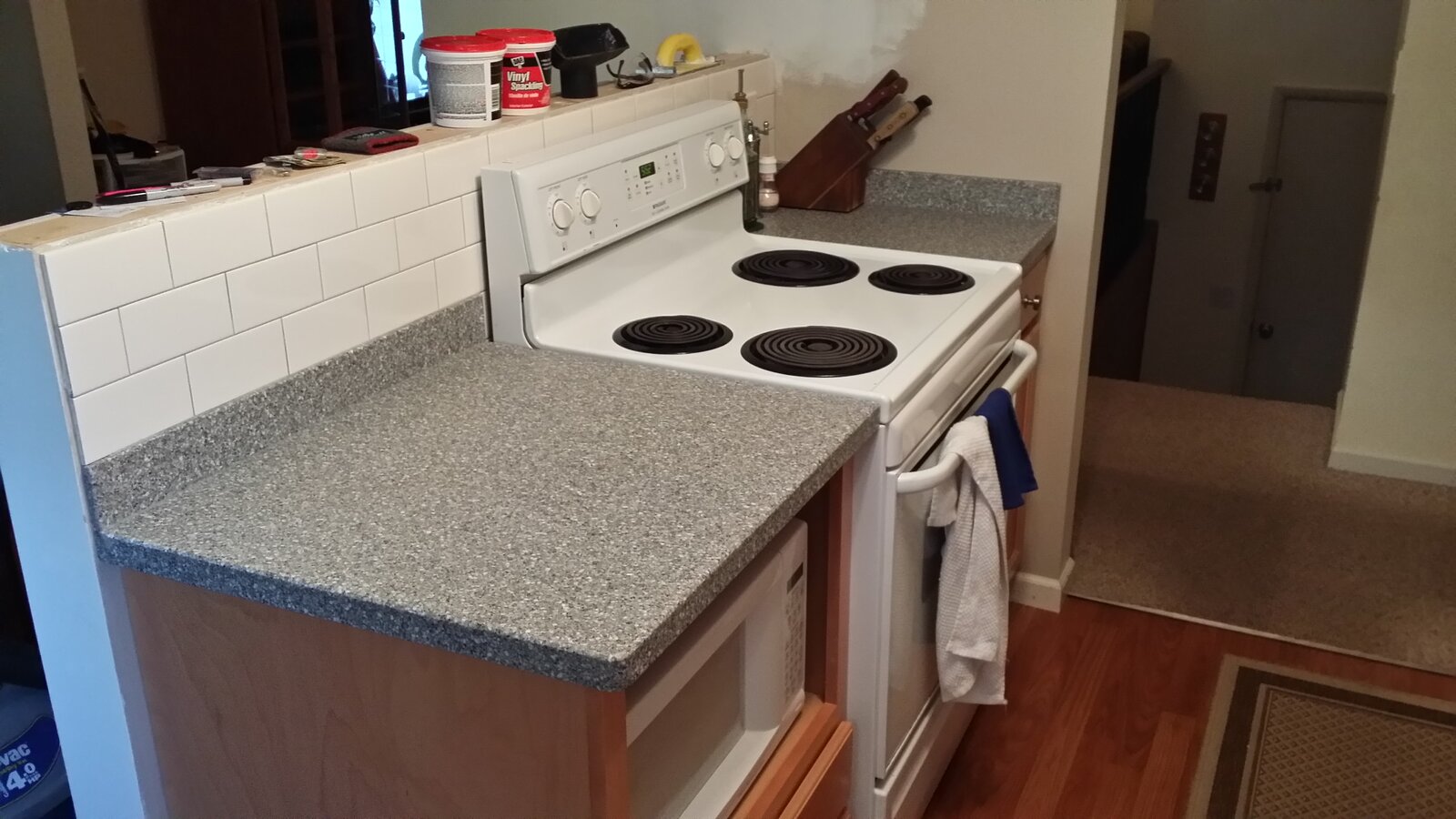 Humongous said:
When I remodeled our kitchen I went with this option, an open cabinet that will hold the microwave. Have replaced it once already, just plug it in and you're all set. If you can do without the cabinet it's a good option.

Love this option and would do it if I had the space. I believe the open cabinet for the microwave at about chest height is ideal if you can.

I do custom cabinets and remodeling in my area. I have had many of my customers with built-in microwaves ask me to remove them and just build a shelf to accommodate a run-of-the-mill countertop model. It is very easy to do, takes up no additional space and makes replacements real easy for the homeowner to do. I highly recommend doing tis whenever a built-in dies!
You must log in or register to reply here.
Previous Next
Share:
Facebook Twitter Reddit Pinterest Tumblr WhatsApp Email Link
Top Bottom