So, I saw a posting in "show off your pens" of this pen and loved that the barrels were entirely blank material. I bought these from another member that had quite a few he wasn't going to use. They can be purchased in large quantities from AliExpress, with a very large shipping cost, directly from the manufacturer, Xiamen Rizheng. A past post doesn't really paint the company as favorable, but I'd bet some of the kits we buy from retailers originated from their factory. I did also find this kit available at Turner's Warehouse for $6 (US). For anyone interested, here is my experience with and thoughts about it.

We generally don't like to use the term "cheap" but, realistically, it is a cheap pen kit. Overall, the finished product is decent. I just grabbed a piece of plain walnut for a test run and didn't bother to CA it. Both tubes are 10mm. All of the visible parts here are gold plated. I do not know the karat or thickness of the plating. This certainly isn't an heirloom pen, but would be good for those inexpensive personalized or branded pens for those of you that make them. There's a lot of barrel to show off those fancy segmented blanks if you don't mind using them on a lower quality kit. Capped, it is pretty much the same length as a Bic stick. For such a slim pen, it's surprising to me that there is also fountain pen version available. 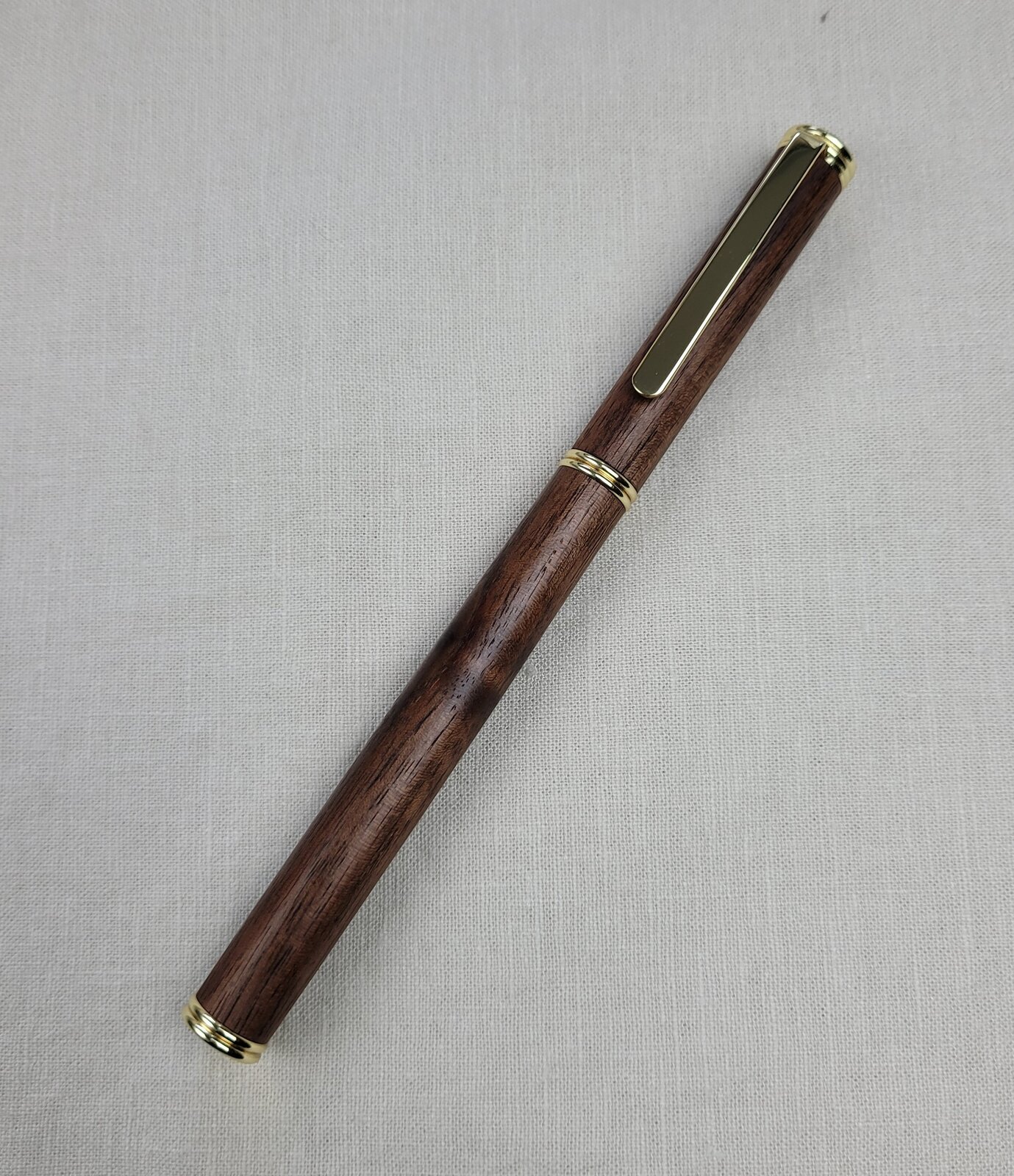 You can see that the snap mechanism (cone) is plastic. That's certainly not unexpected. I was a bit surprised that the tip and black section of the nib is also all plastic. All of the parts that press in are metal. The spring will not come out of the tube once the ends are pressed in. That's a good thing since it won't get lost when changing the ink cartridge. 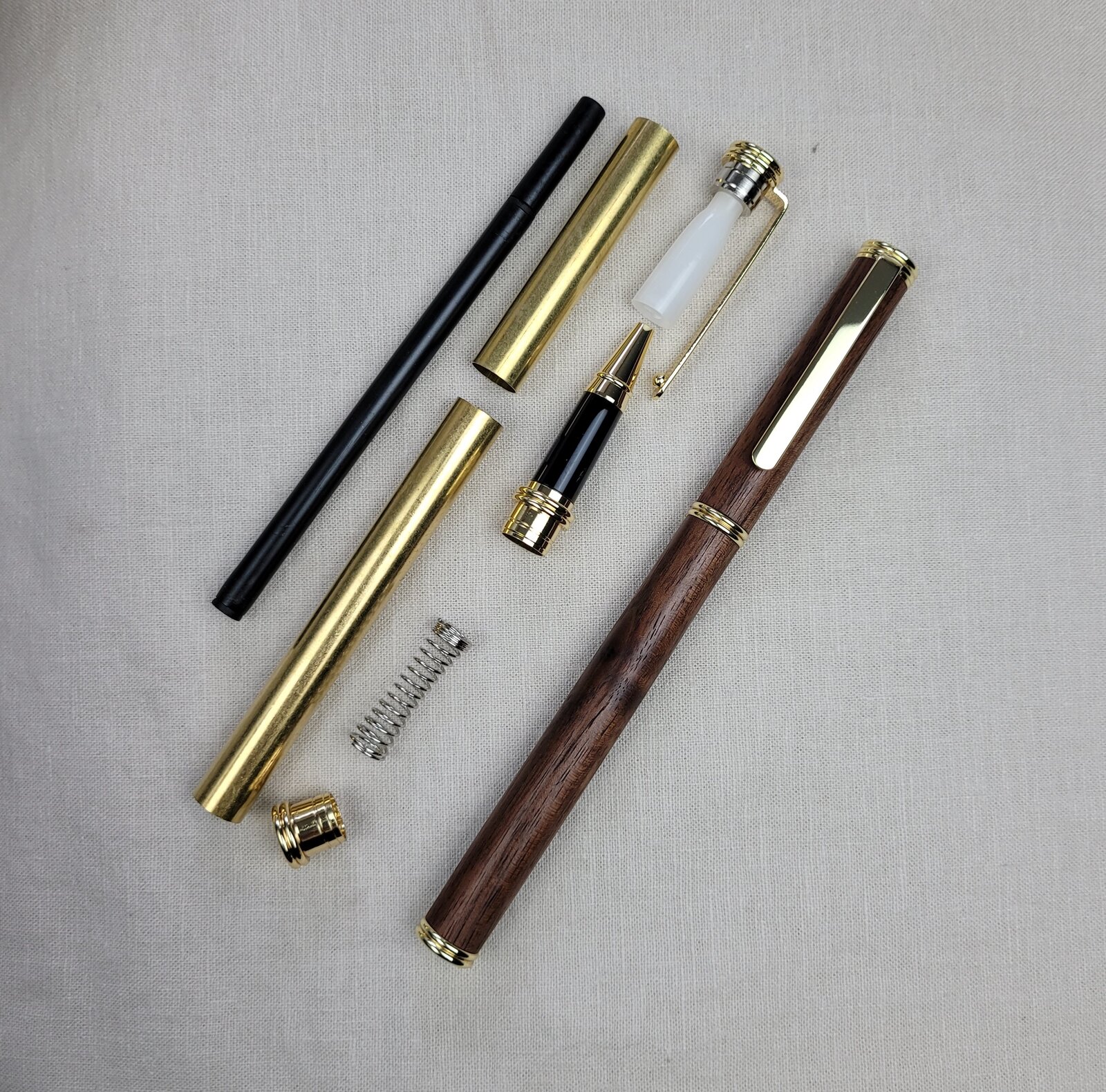 Speaking of the ink cartridge, the one it comes with is definitely garbage. I scribbled a couple sentences and promptly replaced it with a Pilot Precise V7. That cartridge is pretty ugly sticking out of a Jr. series pen kit, but I really like how it looks on this particular pen. You can see the bottom of the cap is open, exposing the tube and leaving the endgrain of the wood vulnerable. There is obviously not much wood left on the tube. For this reason, I wouldn't recommend this for anyone just starting out. 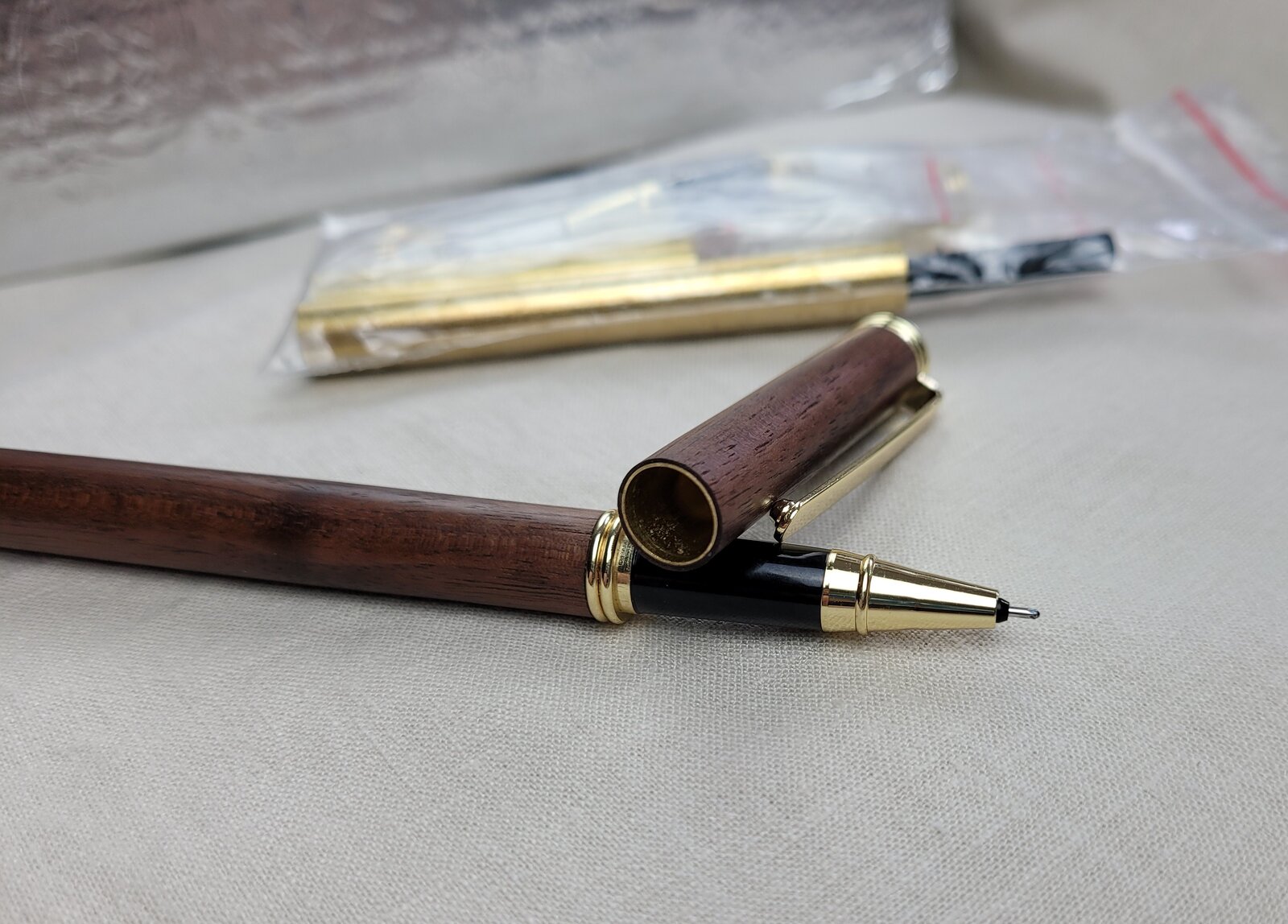 * Important note: The cap tube was too long for the snap mechanism to work properly on this one. It did not attach at all without modification. Thankfully the cap finial does unscrew to make disassembly fairly easy. I just shortened it a bit with an offset sanding jig, but don't have an exact measurement to provide you with here.

The cap snaps in place pretty tightly once it is fit properly. The snap cone (or whatever you want to call it) screws on to the finial threads below the cap nut. Somehow the cone ended up being a little loose when finished, but I was able to carefully use a small brad point bit as a "screwdriver". Probably just as easy, and less likely to destroy it, to knock the cap nut out, reassemble the finial/cap nut/cone assembly and then press it back in again. Once assembled, the snap cone does not unscrew when I twist the cap on the pen.

The clip fit well and is springy enough to easily hold a full sheet of standard copy paper in place without me bending it before assembly. (I'm picky about the clip fitment and function.) Obviously, this can be adjusted after assembly, but keep in mind that removing the finial will also disconnect the snap cone and it will need to be re-attached to function properly (or at all).

I've been using it the last couple days and am confident that anyone preferring a lighter weight pen would be happy with it. I'll definitely make the other pens from the kits I have. Not sure yet if I'll want to sell them or just gift them.

Thanks for presenting this review, including the instructions.

Glad you enjoyed them. You made this one look great. Thanks for sharing.

wrjones224 said:
Glad you enjoyed them. You made this one look great. Thanks for sharing.
Click to expand...

Thanks, Ryan. It is a pretty cool kit and a step up from a slimline in terms of writing quality, considering all the cartridges available in that size.
T