In my search for lightweight pens, I've just gotten a batch of the new Dura Click pens from PSI. My initial impressions are favorable; there's enough weight so it doesn't feel "cheap", but it's comfortable to hold and write with.

My only concern (and this has been mentioned in another thread) is that the pen uses the mythical "refill extender" as shown in the photo below. So far I can't, can't, can't find a place to order extras in case one gets lost. Before I start trying to modify things, has anybody EVER been able to come up with a source for these adapters?

I like the kit and may order one. Is the single component you are searching for - is it possible to turn one, or several?

I enjoy the feel and weight of different pens but on occasion, I really enjoy light weight pens.
Last edited: Mar 9, 2019

Is it possible to get longer refills and do away with that part?? Do you have measurements of the refill with and without that piece??
W

Maybe you've done this already but have you contacted PSI to see who they might know of. In the past they've, PSI, been pretty helpful.

leehljp said:
I like the kit and may order one. Is the single component you are searching for - is it possible to turn one, or several?

I enjoy the feel and weight of different pens but on occasion, I really enjoy light weight pens.
Click to expand...

I guess one COULD turn them, but they're awfully tiny. It'd take more skill than I currently have... Possibly an adapter could be made for the Schmidt click mechanism and either epoxied or press-fit.


jttheclockman said:
Is it possible to get longer refills and do away with that part?? Do you have measurements of the refill with and without that piece??
Click to expand...

JT, the refills are standard Parker type. I'll have to go over to the refill database site and search for other refills.

Seems like I recall that Monteverde made these extenders at one time, but so far I can't find them now.

Go to a stationary store and buy some Unibal 207 refills or get them online. They should be long enough so you can eliminate the extender. On the old style Sierra Click they had the same little extenders in metal that you could leave out when the Unibal was substituted. They write better and the ink can't be washed out of the paper like crooks used to do to alter the amounts. For what it is worth we never lost one of those spacers when using them in the pen. If you're selling them show the buyer how to change the refill so they know they are in there and won't loose it.
Last edited: Mar 9, 2019

If the piece is about 1/2 inch, the Energel refills may fit, also, though you may also need a shorter spring.

gtriever said:
I guess one COULD turn them, but they're awfully tiny. It'd take more skill than I currently have... Possibly an adapter could be made for the Schmidt click mechanism and either epoxied or press-fit.
Click to expand...

They really aren't very hard to do. True they are small, but give it a try. I'll bet you can do it. They main drawback might be tools. You will need some sort of chuck to hold the blank. You could use a carbide tool, or a parting tool to turn the part.

I think an adapter would be harder to make than the extender.

I have a PSI that has a similar adaptor. (don't remember which one). He's my unwanted .02. Are we too concerned with something that might most likely will not happen. But now I'm curious...can someone post a good close up with dimensions. I'd like to see what I can come up with.

Also contact PSI and ask if they can stock x amount of extensions and sell as 3 or 5 packs.

I bought a bunch when I wanted to turn my rollerballs into BPs.
Rollerball Pen to Ballpoint Pen Converter - Plastic Insert

I definitely did pay more than 50 cents each for them. I can't find the site. I am not sure if these are compatible with the PSI pen. Thanks for the feedback on the pen. I meant to order them with my last PSI order but forgot.
R

Could a person duplicate that spacer by cutting small sections of brass or steel rod that is similar diameter?

Doc you still have to turn the tiny little spigot that fits into the top of the refill.
D

Curly said:
Doc you still have to turn the tiny little spigot that fits into the top of the refill.
Click to expand...

Good point, that would be a pain!
D

And does it need to have a hole in it for ink flow?

Nope. Not a press fit. There is enough of a gap to let the air in. It is to keep the thingamabob lined up with the refill.

A "refill extender" doesn't need to be made out of metal. Nylon or delrin (aka acetal) would work just fine and would be easily turned (including the little nipple) with wood tools.

I found one of the metal ones from the old Sierra Clicks. At one time we had handfuls kicking around from pens we put the Unibal refills into. I haven’t taken any dimensions because this new pen may differ. These were drilled out to reduce the weight I think.

No they wouldn’t have to be duplicated in metal if you wanted spares. I think the new pen has them in plastic because of ease of manufacturing them.

Tony and Bob, thanks for the links and for providing another name for them. Greenwald has them for $1.00 each, so I've ordered a bunch.
P

Looks like they could easily be made with a 3D printer. I could give it a try, however I would need dimensions of the piece since I do not have the any of the pens.

If someone would send me the dimensions I will make some and send them to you to try. If successful I can make a couple hundred at a time and would be willing to send them (Free) to those who would like to have spares and not have their pockets emptied at that crazy price.

The so called spacer can easily be made by grinding down the cap of a roller ball refill to fill the gap. This makes any roller ball a potential ballpoint.
G

Here's an idea. Cheap too. Use the plastic piece that comes with the Schmidt refills. Trim to length and press it onto the clicker. Press it until it stops against the c-clip. I don't have one of the pens together yet to determine the actual length. Guaranteed the piece won't come off. 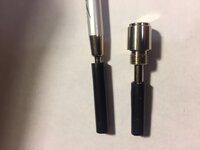 Not to hijack the thread, but I just started another one about those Duraclick pens and the Schmidt SKM-88 mechanisms in them. I started it before I realized this one existed.

My thread is a little different. I am asking about the SKM-88 mechanisms, their quality, and which kits have similar high quality click mechanisms. See:

Would shortening the tube length to remove the extender cause the overall pen length be too short for comfort?

You folks are coming up with all sorts of things to try. That's one reason I love this site - people are always willing to share their thoughts and ideas.
F

My name should be Mr. Clumsy; I have no trouble losing or ruining a part of a pen I'm making. I recently called PSI and was able to buy the parts that I needed to replace.

Just two days ago I dropped the Slimline pro Single tube Click Pen (made using the IAP tutorial by Tom Wilson) and clearly ruined the clicker. At some point I'll call PSI to order the clicker and whatever components I ruin in disassembly.

I'm looking for the "best" clicker. Maybe the Duraclick is a candidate.