I've been pondering how to make a deer antler single pen stand for a while. Finally took some time to try something out. Trick was getting the antler to mount flush, here is how I did it:

1. Rough cut the antler
2. drilled a 3/8" hole in the antler using a cordless
3. Glued dowel in antler with excess length
4. Mounted in a collet Chuck and turned the antler square to the dowel
5. Trimmed the dowel down and glued in the wood block

The wood work was pretty simple, just a piece of scrap pecan hickory.

The pen is a Stratus, also with deer antler.

Made this for a coworker that supplies me with antler. It is for a bow hunter, so he didn't want a bolt action. He told me to make something that I thought he'd like -- hopefully this works for him, wouldn't mind keeping the antler coming.

Very nice. I plan on doing some work with antlers this week. Are they difficult to turn and sand?
O

After seeing Sam's stand I thought I would make one using his idea(with his permission).
I had made a bolt action pen with antler for a friend's wife to give him at Christmas. When he told me how much he liked it I thought a stand be appropriate.
I used an antler that the dog had dragged up and a piece of Mesquite Burl I had laying around. Finished with 2 coats of Tung Oil, buffed with White Diamond.

Thanks Sam for the idea and permission to copy.
Jerry 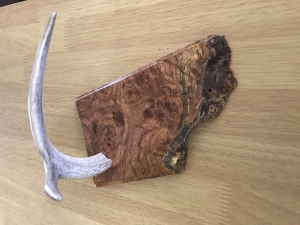 That looks awesome Jerry! Well done, I'm sure your friend will love it. The mesquite burl you picked is fantastic, wish I had a bunch of that "laying around"!
F

Texas Turning said:
Very nice. I plan on doing some work with antlers this week. Are they difficult to turn and sand?
Click to expand...

You need to wear a full-on respirator...not just a paper mask. Antler dust has properties similar to asbestos.

Texas Turning said:
Very nice. I plan on doing some work with antlers this week. Are they difficult to turn and sand?
Click to expand...

Can be a bit hard to turn but slow and cautious is the way to go. As for sanding, antler is often a very porus material. There can be some solid bone that will sand nicely. But, I just don't worry about it. This is a natural material and I like the natural look and feel where it is less than glass smooth. One of my personal pens is like that and I like the natural patina it keeps acquiring.

I had to mage an individualized encasement fir the lathe with vacuum, outside the shop, flew through numerous N95 masks, and eventually with a laser label I was happy but I do not plan to work with antler again due to the smell making me nauseated. The customer wanted it rough looking like it was never on the lathe, no finishing. I desperately wanted to coat it in CA to prevent some eventual cracking! 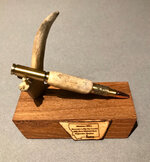