A pair of Christian crosses

Made these two prototypes for a friend who wants 10 pens to give as Xmas presents to his church elders. Ti gold 8mm Euros in BOW with bloodwood crosses.I haven't showed them to him yet so let me hear all comments and suggestions as to what you might have done differently.I have plenty of time to make design changes.
Thanks in advance for all your comments/suggestions. 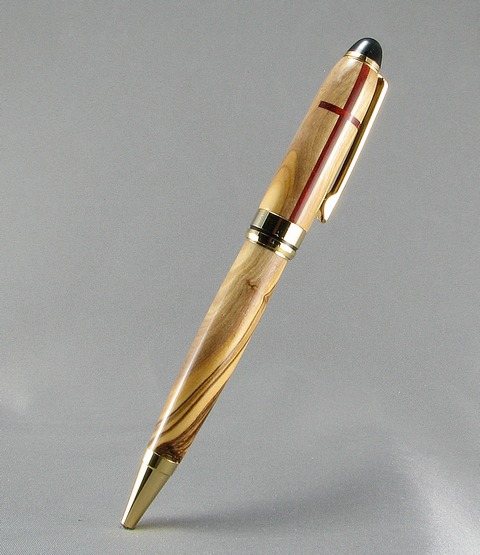 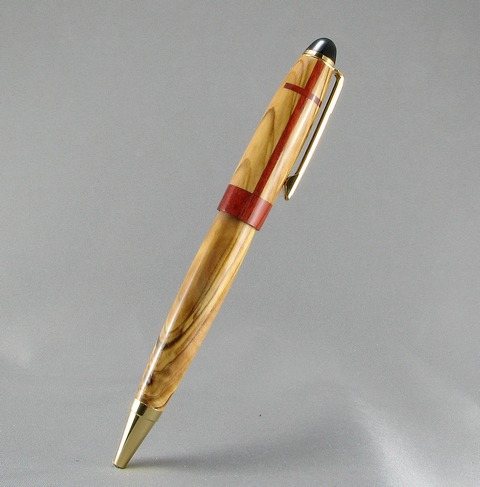 Very nice - I had been thinking of trying something like this, and now you have shown me that it will work. Very nice!

One idea, a black (ebony?) ring around the center might be a symbol of how the cross triumphs over sin.

I think the first one is better. Although the custom band looks good, it kinda blends the color for me. Wow, this looks so good, I hope you don't mind others borrowing the idea.

I have a fundraiser for my daughters school that I was going to donate a BOW pen/pencil set and this would take it up a notch!

Very nice pens. I like the bloodwood centerband the best, kind of balances everything, but then, I like wood over metal anyway []. Hope you dont mind me borrowing your idea?

Lovely work. My preference is for the Bloodwood centre band.[][8D]

Nice concept. Does the cross go all the way through?
T

Your pens look great!! I too especially like the one with the center band.

Nice work. I definitely like the second one better. But, is there some reason you mounted the clips the way you did? For a right-handed person, this would put the cross facing away from them since most right-handers write with the clip facing up.

You did a fine job on the cross. The joinery and workmanship is spot on.
The photo makes it pretty clear the bloodwood is an inlay and doesn't go all the way thru.

Since you requested opinions: I think it would look better if you kept the horizontal members
from wrapping around the curve AND if the ratio of horizontal elements to vertical elements matched
the Golden ratio (1.618) with the intersection placed such that the horizontal elements and top vertical
element are equal in length.
The first time I personally noticed this was standing under the dome of the Duomo in Milan and looking up and around. It is an inspiring vision.
The intersection of the cross laid out in the aisles formed by the Transepts, Presbytery, and Nave
appeared as such.
It is, most likely, typical of many cathedrals in the architectural layout.

To create that, you'd have to make stop blocks to keep from cutting so far. It'd probably be safest and
easiest to do that using a router in a table w/ fence and stop blocks. Further, once you did that,
you'd want to bring the cross down more towards the center of the upper barrel but most likely
still in the upper 2/5's.
And, I'd maintain the bloodwood centerband -- it's an attractive feature.

Thank you for all the positive input! By all means feel free to copy anything you wish.To me that's the beauty of this forum,putting your ideas out there for everyone to comment on and for everyone to feel free to take whatever they wish and hopefully expand on it.
Perhaps I should have taken a photo from the other side because the vertical part of the cross goes all the way through,i.e. the pen looks the same from both sides. I started by cutting the upper blank in half and gluing in the bloodwood that I milled to the same thickness as my thin kerf 71/4" skill saw blade. Then I set up my miter sled and lowered the blade so it only cut part way through. One pass on each side and you have a cross. Glue in some more bloodwood and that's it! That might help to clear up why the vertical part is so long.I don't have the skills or the patience to do such small inlay work.

Thanks again for all the comments. Means alot to me coming from this group.
P

Rick, Nice job. I vote for # 2. I would like to thank you for share HOW you did it. You are right that is the value of this forum. I will we trying this out in the near future. I am sure the elders will love it. Great work.[]

Thanks for sharing. Very nice work and I like most of everyone else prefere the second one.

Rick, great job. Personally I like the "cross on the hill" that you featured a while back, however, of these two I'm partial to to wood cb.
Vern