Recently, Alan Stratton posted a YouTube video showing how he used the multiple-axis technique to turn a one-piece scoop where the handle is offset close to the top surface of the finished scoop. He turned what was essentially a goblet, without a base, and then cut away a portion of the bowl with a bandsaw. I don't have any problem with multiple axis turning, but I don't have a bandsaw, so I had to find another way to do the project.

My approach was to start with a bit of 4-quarter cherry. I face-glued a scrap of dimension pine (using a 'paper joint') to create a billet with a square cross section. Then I identified a turning axis that was offset ¼" into the cherry half of the billet, mounted it between centers on that axis, turned it to create a cylinder about 1 ¼" in diameter with a mounting tenon on the end that would later become the handle. The cylinder had a longitudinal joint, with slightly more than half of the cross section in cherry, and slightly less than half in pine. Because paper joints are intentionally weak (so that they can be easily split apart), I wrapped the portion of the cylinder that would eventually become the bowl with duct tape to reinforce the joint.

I then gripped that tenon with the jaws of a scroll chuck, and drilled out the cavity. Normally, cavities are drilled using a Forstner bit leaving a flat-bottom hole, but because my scoop was going to be small, and because I didn't want to have to deal with the dimple left by the spur on a Forstner bit, I used a standard 1" twist drill bit. The twist drill bit left a conical bottom, which actually was better for a scoop.

After sanding the inside of the cavity, the next step was to remount the blank using a 1" diameter jam chuck that fit inside the drilled cavity, and then turned a 3/8" diameter handle. Because the turning axis was ¼" inside the cherry half of the blank, the pine was turned away completely, leaving the handle entirely in cherry. I sanded the handle, and then removed the duct tape that reinforced the paper joint. I tapered the bowl portion of the turning down to a 1 1/8" diameter at the opening of the bowl (which means that the wall thickness at that point was about 1/16", and sanded the outside of the bowl.

After removing it from the lathe, I used a bench chisel to carefully pry apart the paper joint, leaving only a thin layer of paper on the top of the cherry scoop which could easily be sanded off. For this step, I used a sanding disc that mounts on my lathe and that accepts standard 5" hook-and-loop abrasive discs. While sanding, I also rounded over the 'wings' at the sides of the opening of the scoop. The project was then finished with four coats of pure Tung Oil, with the first coat thinned with turpentine.

So once again, the principle of 'sunt multi modi ut felem pellis' came into play – there are many ways to skin a cat. 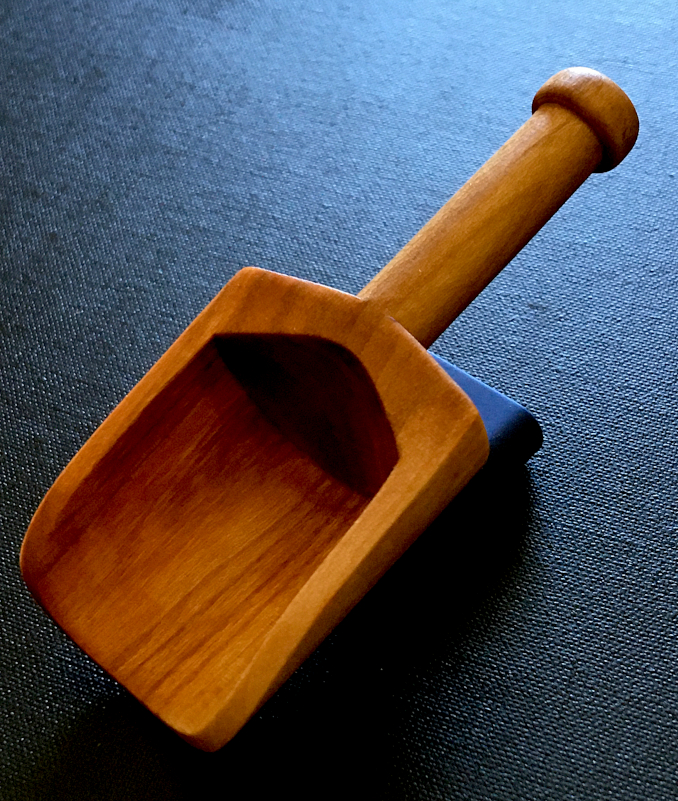 Man hours to complete? I like how you accomplished the functional piece of art by using what you had on hand.

I did allow the paper glue joint to cure for about four hours before I tried turning it. Unfortunately, I learned the hard way that it wasn't strong enough to withstand the stresses associated with drilling and turning, so after it came apart as I was drilling the cavity, I had to reglue it and then added the all-purpose fix (duct tape), and wait for that glue to cure. The other possible issue related to the paper; the best choice is heavy kraft paper (like Harbor Freight bags). But I used a light-weight paper from a small Ace Hardware bag, and it may have been too thin.

So if I were to do these in production mode (making a bunch at one time), I would probably glue up the blanks and let the paper joints cure, perhaps overnight before wrapping them with duct tape. Hopefully, I would learn from my mistakes the first time to eliminate the do-overs.