Ok, this is old hat for most of you but I sat on the hardware store floor for almost an hour yesterday figuring out just EXACTLY what I needed to set this all up. I figured I would try to give someone else a jump start in the future.


Here is an overall photo of the entire setup. 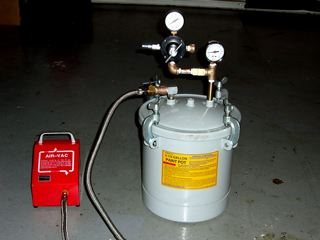 Harbor Freight 2-1/2 Gallon Pressure Paint Tank (I call it "pot") http://www.harborfreight.com/cpi/ctaf/displayitem.taf?Itemnumber=93119 with the paint pickup tube cut off. (Unless you are Hercules, don't try to unthread the $%^&* thing or you will end up with pulled muscles.)

This is the Air Vacuum Pump with the vacuum outlet replaced with a 1/8" Female Pipe Thread (FPT) to 3/8" Compression (CMP) fitting and connected to a 3/8" CMP to 3/8" CMP braided line (sold as a dishwasher hookup line): 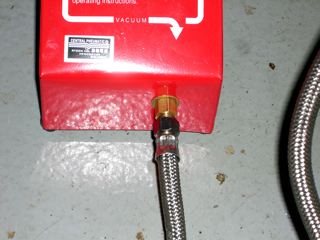 The back of the vacuum pump has a 1/4" Male Pipe Thread (MPT) to male air-hose quick-connect from your air compressor. 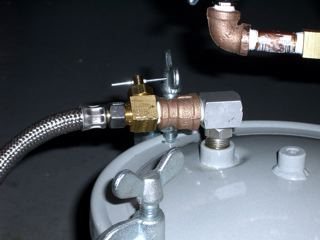 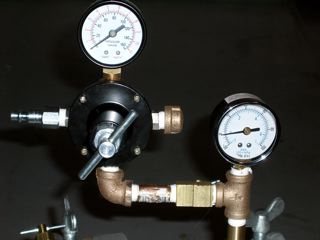 To use this, just close the vacuum valve, open the pressure valve then hook up the compressor line to the quick connect on the pressure regulator and adjust for your selected pressure.

For vacuum, close the pressure valve, open the vacuum valve and then connect your air compressor to the back of the vacuum pump. This took my vacuum to -29 psi within about 2 minutes (I'm at roughly 400' above sea level).


The sad thing is those 150-psi valves from OSH start leaking at about 50-psi even when tightened so much you bend the handle. A very slow leak, but I will be replacing them with something different. MSC Direct has some decent looking ones, just do a search for valves then narrow to 1/4", bronze, with a lever handle.

Originally posted by gketell
<br />
The sad thing is those 150-psi valves from OSH start leaking at about 50-psi even when tightened so much you bend the handle. A very slow leak, but I will be replacing them with something different. MSC Direct has some decent looking ones, just do a search for valves then narrow to 1/4", bronze, with a lever handle.

Why not just use a standard WOG 1/4" brass ball valve from the Lowes or Home Depot with some nipples(reducers depending on where you are at) if necessary? I have never had a standard BBV leak. Various fittings have leaked, but ball valves no.
.

Let me look at the HD after I get some work done today. Maybe we can arrange something.

Now IF you really want to see a professional's setup, check out this rig ...
http://www.talkbass.com/forum/showthread.php?t=176923

If you "register" at the site you can get a lot of information. About the ONLY THING they will not tell you is exactly what it is that they do to work their magic with the wood. Don't even bother asking as you will get no definitive reply aside what you will get reading all his information. It is interesting if you are wondering about the stabilization processes.

Just for 'kicks', try and find out how much that vapor pump costs ... Be seated if you find a price! []

For now I do believe that the rest of us 'poor' souls will have to make do with things like the HF pressure pot. AT least we can try to make ourselves happy trying. []

Thank you very much, Greg.

Now that is just NOT fair.

Thanks to Glass Scratcher I was able to locate some of the ball valves at Home Depot. They were on a different aisle, several aisles away, from the rest of the plumbing parts. So I rebuilt the system and pressurized it over night. Started at 67 pounds, closed all valves and disconnected everything. In the morning I was down to about 18 pounds.

Where were the leaks? I sprayed it all down with soapy water and found that every one of my joints was air tight. But... 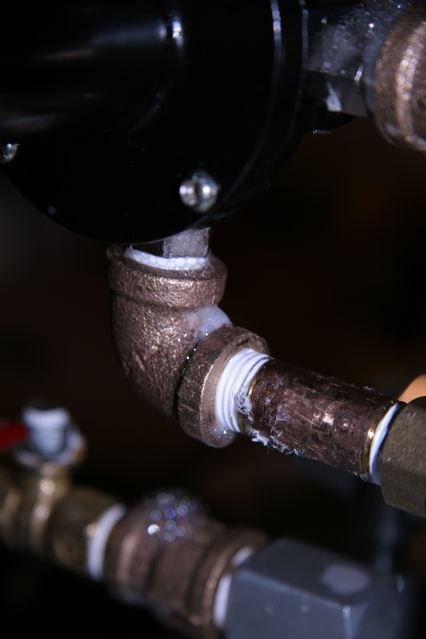 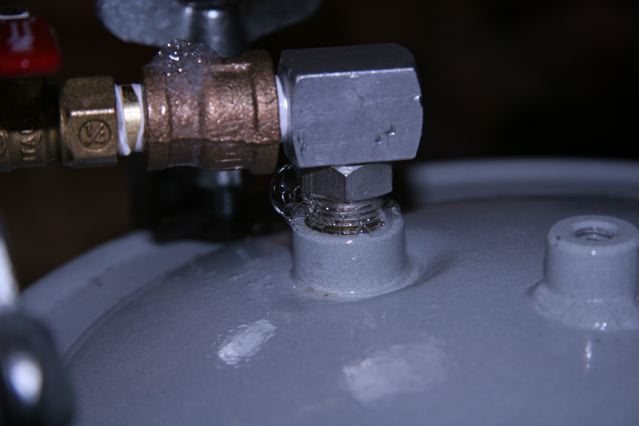 The freaking cast elbows/Ts/caps all leak through the cast. And the Paint Pot's original threaded joint leaks.

"What now?" Well, refusing to spend another penny on this contraption I decided to try to cheat. I cleaned them all up with Denatured Alcohol and then applied maximum vacuum (the gauge reads somewhere around -40 so I don't beleive it much) 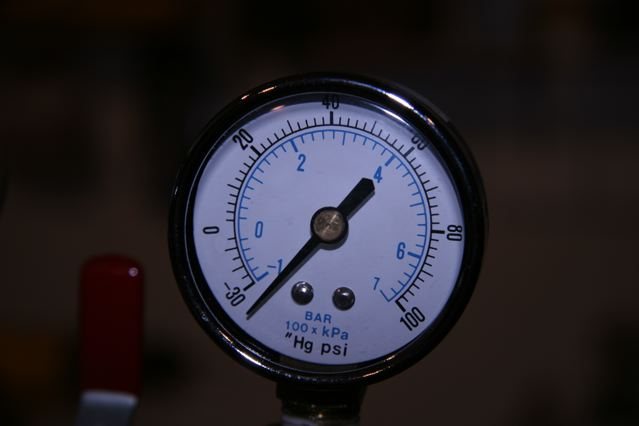 and then coated all the cast parts with thin CA and let the capilary/vacuum action pull it into all the leaky parts hopefully sealing them.

Ok, now for the new build out instructions with good valves: 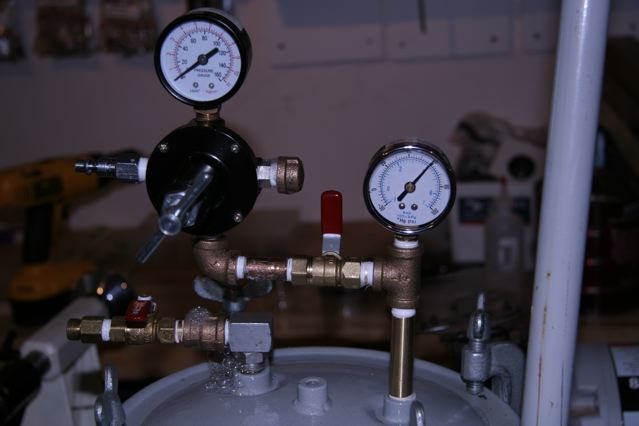 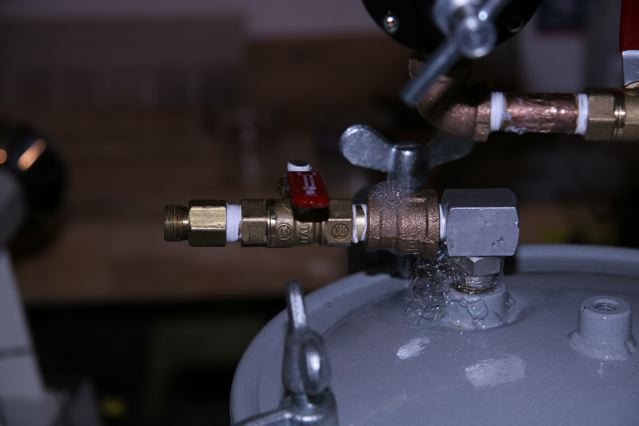 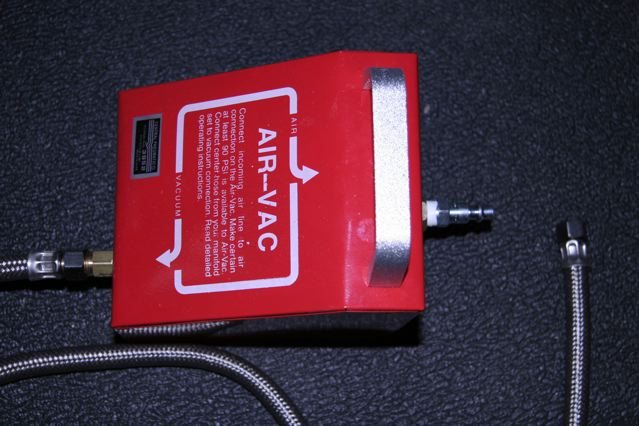 
GK
PS all joins have the male threads wrapped with 6 turns of plumber's teflon tape and then tightened as tight as I could without worrying about breaking the parts.

PPS The CA treatment worked perfectly. No more leaks from the cast parts. Just have to seal the one leak where the original HF 3/8" elbow joins to the pressure pot.

Originally posted by gketell
<br />Now that is just NOT fair.

It looks great! Now when are we gonna see some castings???


It looks great! Now when are we gonna see some castings???

This is my first cast made for my neice who just turned 13 and is Very into "Brands". I made a mailing label of the Coach "Scribbles" pattern and glued it to a tube and cast clear PR over it. The bottom half is from Jeff in Indiana. 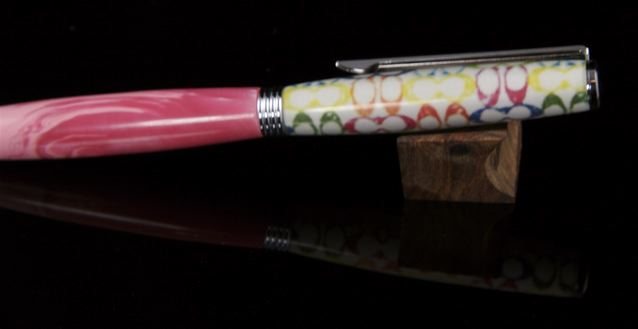 Nice work! And thanks for posting all the pictures!
D

On the pressure side couldn't you use a vaccum guage only here, instead of the dual guage (vac and pressure)??

You would have to rearrange it a bit so the vacuum gauge end up outside the valve on the vacuum-side so that the vacuum-only gauge does not get pressurized when doing the pressure side of your cast. But other than that, yes you could.